The rejuvenated grand dame of Moroccan hospitality is overflowing with riches.

Given a chance to either connect through Mohammed V International Airport in Casablanca or take the nearly three-hour drive from Morocco’s largest city to Marrakesh, most adventurers opt for the smooth ride down the A3 highway that connects two of this kingdom’s most important cities. The reason is obvious. There is an undulated sense of discovery that starts with the coastal plains of “Casa,” as the locals call it, and ends at the tranquil foothills of the High Atlas Mountains. The route crosses a rural world, a captivating one marked by an intriguing landscape and gently rolling countryside that’s at once lush and mysterious. To some, this collocation is foreboding. To others unfazed by its collision, this Moroccan tapestry is a celebration of local complexity, all woven into a splendor that’s uniquely its own. The same can be said about the enchanting and regal La Mamounia, arguably Morocco’s most revered hotel. A quiet and ultra-sophisticated oasis surrounded by roaring sounds of zipping scooters and calls to prayer, La Mamounia is a beautifully resolved study in contrast. Once owned by Prince Mamoun in the 18th century and then reopened in the 1920s as a hotel, La Mamounia’s stunning blend of Art Deco and Orientalist décor has seduced the likes of Winston Churchill, who invited Franklin Delano Roosevelt here, and Alfred Hitchcock, who shot scenes from The Man Who Knew Too Much in the hotel’s lobby. The list of celebs who appreciated its long history includes the Rolling Stones, Charlie Chaplin, Sharon Stone, and Yves Saint Laurent, to name but a few. Then and now, the hotel’s stately energy is exciting yet soothing, reassuring in its steadfast commitment to service. At its core, La Mamounia is Moroccan, yet in its out-of-this-world sophistication, it transcends any attributions.

Not one to rest on its laurels, the recent and much-lauded renovation, overseen by designers Patrick Jouin and Sanjit Manku, has heralded another chapter for this iconic property. Its 20 acres of orange trees, rose bushes, cacti, palms, and olive trees serve as an unforgettable canvas to the modern Moroccan design that commands La Mamounia’s latest iteration seeking to improve on perfection. This blueprint moved the iconic Churchill Bar, now Le Churchill, near the new intimate cinema and a souring, cupola-capped tea salon. The other changes include the new Jean-Georges Vongerichten’s L’Asiatique and a revamped L’Italien, the Salon de Thé par Pierre Hermé, and the intimate L’Œnothèque, a chef’s table of sorts for 12 oenophiles who can delight in 2,000 rare wines that make up this vault.

Some have suggested that La Mamounia’s location was the sole reason for this grand dame of hospitality’s reign over all the other big-name properties that have recently opened their doors in the “Rose City.” Yes, the hotel is conveniently located just two minutes from the Koutoubia gardens, which give on to Jemaa el-Fna, the main square of the old town. And yes, there is an undeniable fairytale-like quality to the Moorish opulence here. But, just like that journey from Casablanca to Marrakesh across the rural areas, La Mamounia’s most heartwarming statements may be her most modest… like the ceremonial greeting of milk flavored with almonds and a handful of fresh dates given to everyone checking in, proving that small and unexpected things make a lasting impression. 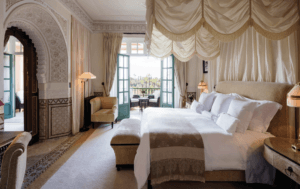 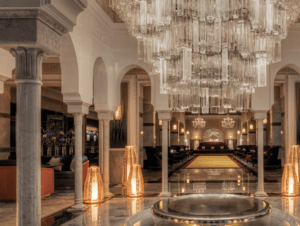