TOP OF THE WORLD

AN INSIDE LOOK AT A QUARTET OF PRIME BERKSHIRE HATHAWAY HOMESERVICES PROPERTIES REVEALS LUXURY AT ITS BEST IN COVETED CORNERS OF THE GLOBE. 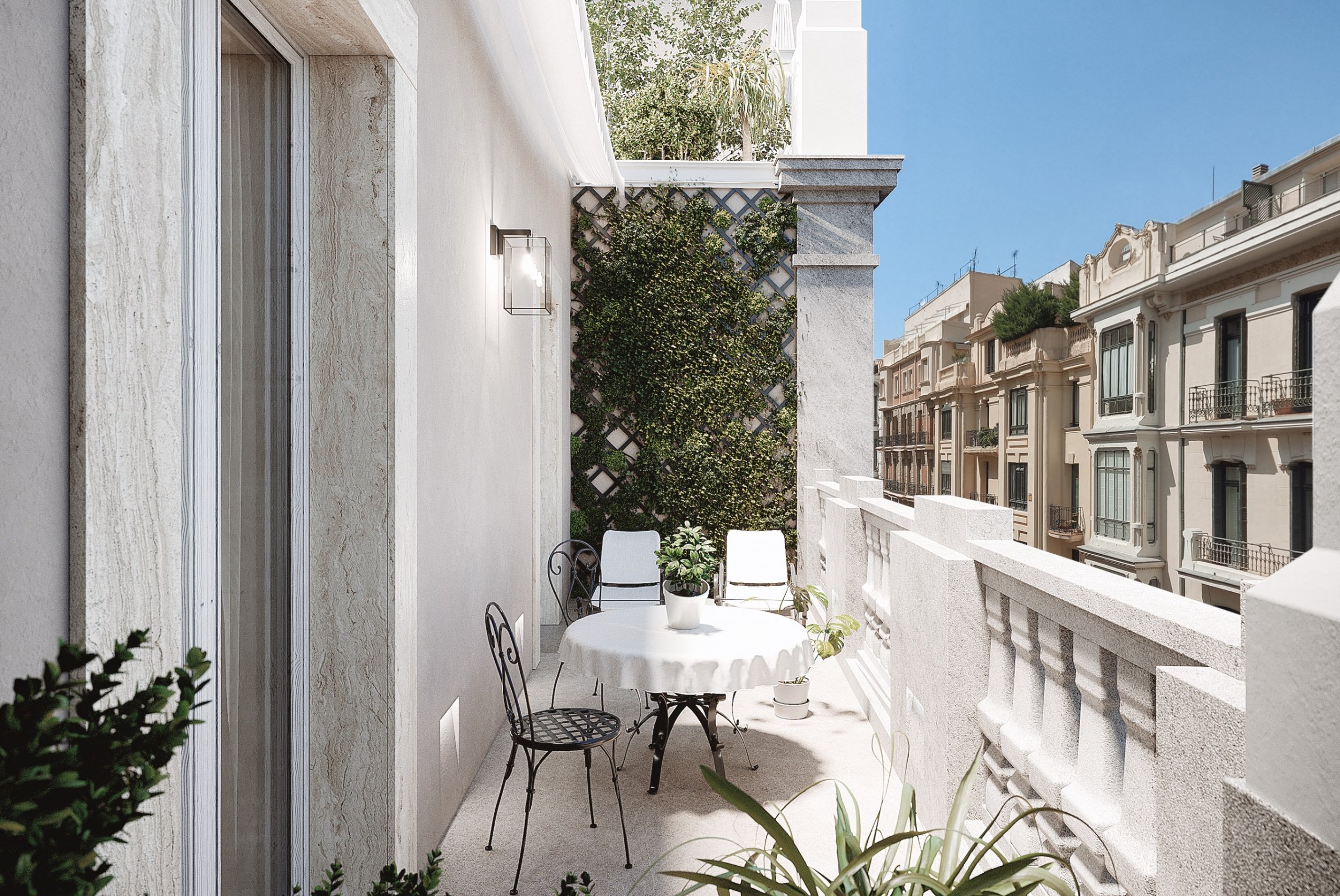 Originally designed and built by José de Azpiroz in 1924 and owned by the same family for almost 100 years, the Palacete de Azpiroz represents a rare opportunity to live in a stately historic mansion updated with tailor-made interior modern finishes and state-of-the-art features in the most prestigious neighborhood in Madrid. Situated on a quiet street in the heart of Almagro, the interiors of the $14.25 million, 7,535-square-foot, four-story dwelling is currently being fully refurbished by the architectural studio of Rafael Robledo Arquitectos, while meticulously preserving its legacy.

According to Álvaro González de la Hoz Fernández, managing director at Berkshire Hathaway HomeServices Madrid, the architects’ objective is to create the most exclusive residential property in the capital. “A purchaser can customize its distribution, so it can be tailored to suit anyone’s needs at whim,” he says. “There is no mansion for sale in Madrid with these characteristics and this opportunity, which makes the property very unique.”

The façade, the staircase, and the main entrance remain true to the original design, so the rehabilitation of every exterior detail has been planned to enhance its inherent beauty. But most of the mansion can be modified. “The future owner can combine an impressive residential area with a spa area, gym, garden, and garage, for example, with an area made up of offices, an art gallery or a showroom dedicated to business,” explains González de la Hoz Fernández. Currently, the updates will incorporate the new advances in home automation and sustainability, while respecting the stately and classic splendor of the Palacete’s past. 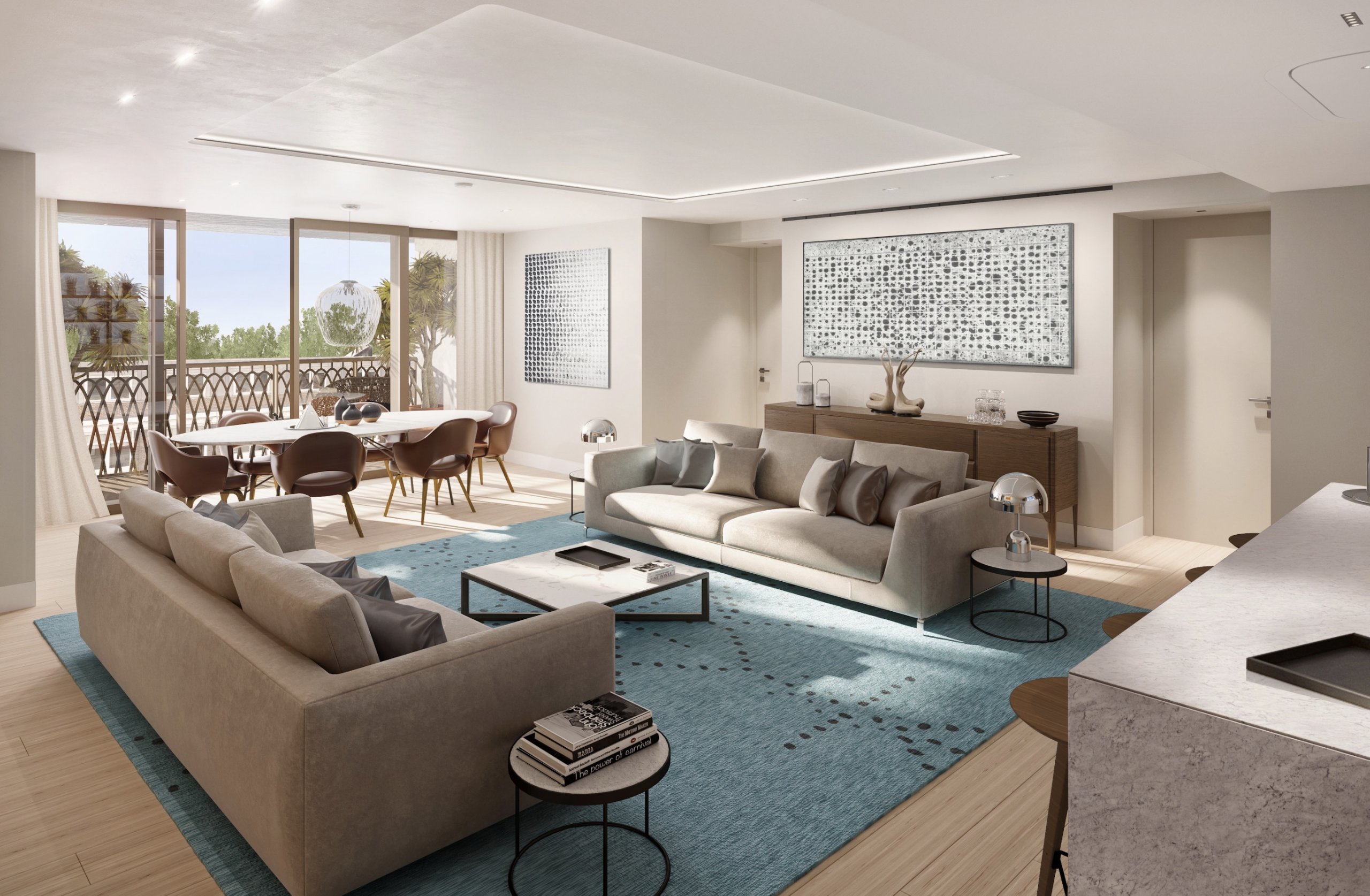 Designed by British architect Simon Bowden and sitting at the heart of the notable Howard de Walden estate, the newly completed five-story building houses just 54 one- to three-bedroom apartments, offering a rare opportunity to be part of the provenance of aristocratic estates in Central London, notable for the famous names like Charles Dickens, Jimi Hendrix, and Paul McCartney. While the structure’s balustrades reference the classic Victorian mansion block, its white glazed-terracotta cladding is contemporary, and its signature feature — an intricate lantern frieze running along the edge of the terraced penthouses — crown the design with distinction. “We wanted to use technology and engineering to reintroduce old craft into a contemporary production,” says architect Simon Bowden. “The balustrades were produced by a local foundry and reintroduce an architectural aspect that is hundreds of years old.”

All apartments, including the $9.15 million three-bedroom, three-bath 1,873-square-foot unit shown here, revolve around a central courtyard topped with an expansive glass roof that fills the core with daylight, while open sides bring in fresh air. Among its key selling points is its location, says Martin Bikhit, managing director of Berkshire Hathaway HomeServices London Kay & Co./Marler & Marler. “Marylebone, in all its understated glory, is the very best of central London living,” Bikhit explains. “It’s a hidden enclave that is a welcome surprise — an unspoiled pocket of London that boasts charming architecture, artisan cafés, and tasteful boutiques.” 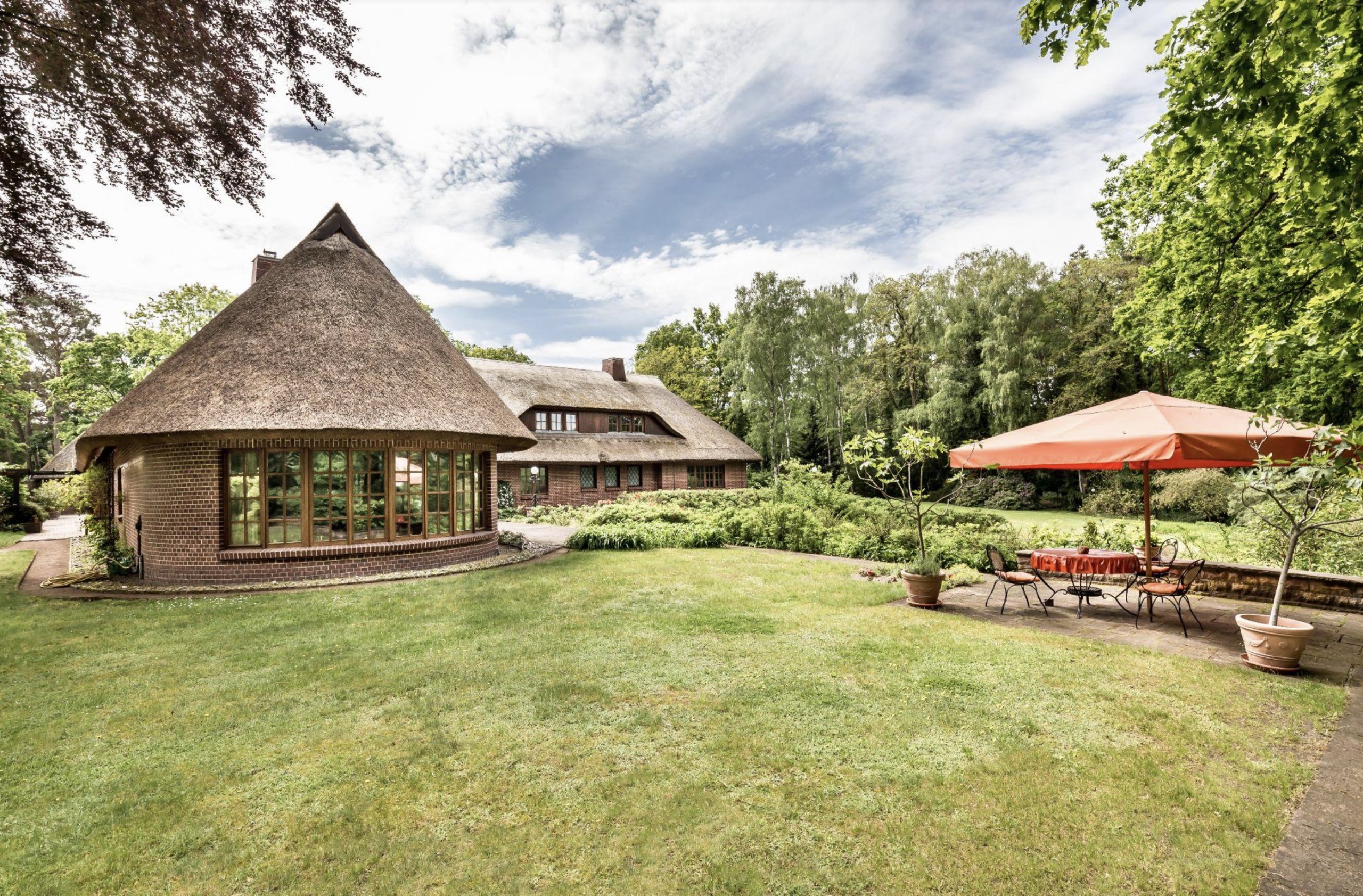 Commissioned by Walter Felsenstein, the founder of the Komische Opera company, and his wife, Maria, this enchanting countryside compound designed by German architect Johannes Bendik and completed in 1967 brims with elegant charm amid the sloping hills of a 2.16-acre site in the outskirts of Berlin. “The secluded historic property, which includes 4,843 square feet of living space and horse stables, sits adjacent to a nature preserve and is maintained by the Felsenstein family to this day,” says listing agent Evelyn Wilcek of Berkshire Hathaway HomeServices Rubina Real Estate. “It was important to Walter and Maria to build a spacious and luxurious residence that would fit perfectly into the landscape and not appear overbearing.”

In addition to the 10-room, four-bath, red-brick, thatched-roofed main house, highlights of the estate include a guest house, a green house, and an outdoor kitchen plus a pool and sauna surrounded by lush lavender and rose bushes. Terra-cotta paving stones offer a touch of Mediterranean flavor near the charming garden house with an open fireplace outdoors, while a gallery with a wide wooden staircase in the main living room and transom windows along a rounded wall in a second generous living space anchor the home with character. Beautifully appointed with antique furniture (most of which may be purchased), the bedrooms feature traditional chimney ovens. Inlaid parquet wood and precious stone tile floors, mullioned windows, and wooden ceiling beams add character.

Surrounded by a roughly six-foot-high brick wall high, the estate overlooks the adjacent forest and gated paddock, which is accessible from the premises for an easy morning or afternoon horseback ride. 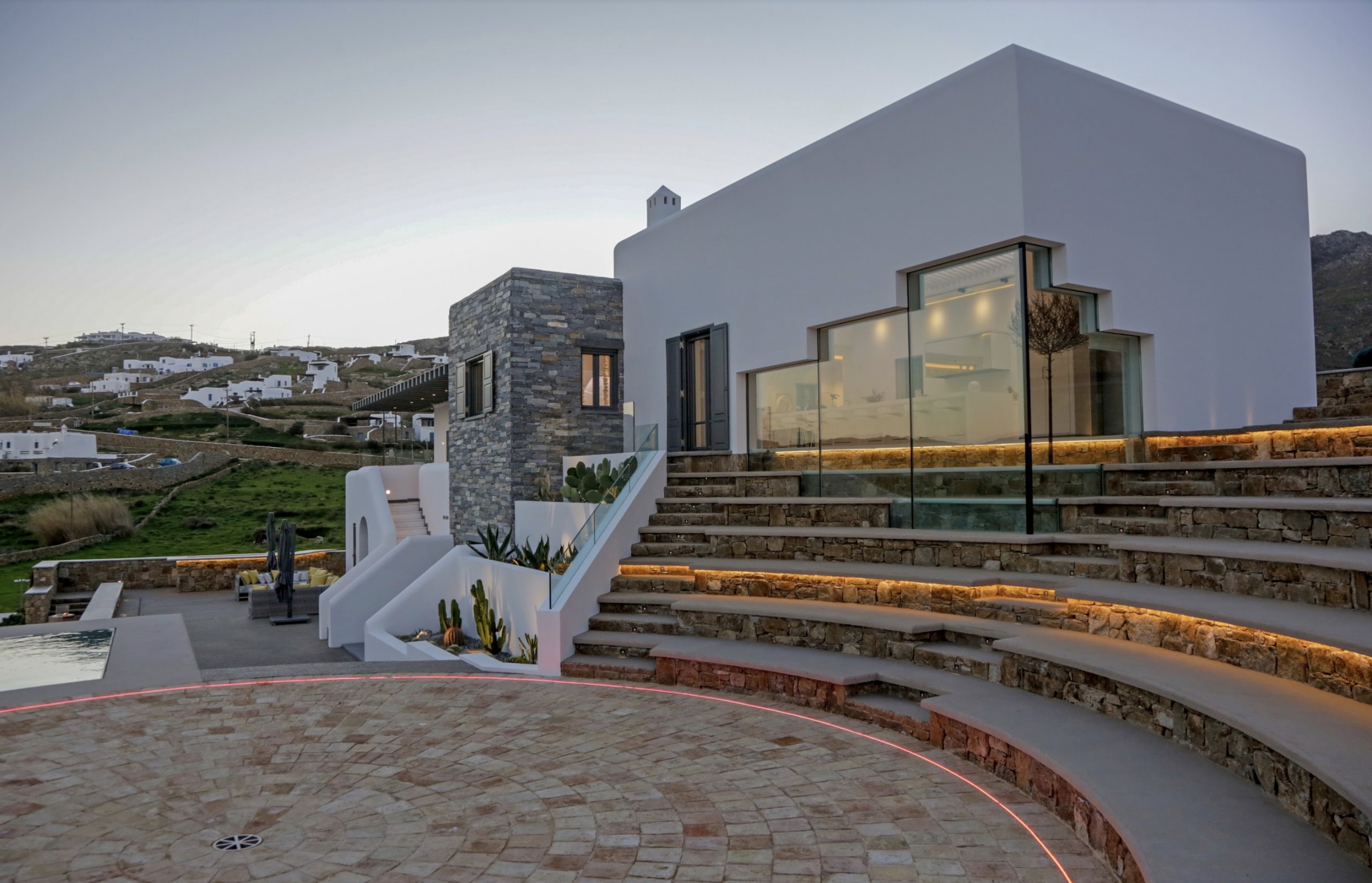 Set amid nearly 3.5 thoughtfully landscaped acres on the Greek isle of Mykonos, this spectacular ultra-modern villa not only offers sweeping vistas of Panormos Bay but also features virtually every amenity a seasoned globetrotter could ask for. “Designed by acclaimed Greek architect Mparmpalias, the home combines the living, entertaining, and artistic ambiance of Mykonos with a perfect amalgamation of Mykonian minimalism and the finest luxurious amenities of the modern world,” says listing agent George Yfantis of Berkshire Hathaway HomeServices Athens Properties.

Inside the 8,235-square-foot, six-bedroom, eight-bath dwelling, the accent is on comfort and views with a living space, an open kitchen with a fireplace, a lounge seating area and a barbecue balcony crowning the structure on the uppermost entrance level. On the next level down, two of four suites with ensuite bathrooms feature sea views, the other two offer garden views, and a playroom, family room, and television room. And the lowest level includes two more private rooms with ensuite baths, one of which includes a hammam, as well as a massage and fitness room and a second kitchen.

“The outdoor highlight is the open-air amphitheater integrated into the landscape and equipped with a bar, provisions for a DJ, and the capacity to host 250-300 people,” says Yfantis. “Additionally, an open-air movie theater provides the ideal place to enjoy a movie under the Mykonian sky.”

A fire-pit lounging area with a circular couch for romantic evenings by the sea, a round petal-shaped pool, geothermal and solar energy and water systems, a life-size chess lounge, and a private heliport contribute to the rich mix of amenities of the stunning $25.5 million property.