The Power of the Dark Side

The Black Badge Ghost is the most technically advanced Rolls-Royce on the market. To get your hands on one, you have to embrace a new era of “post-opulence.”

Contrary to its moniker, the Black Badge Ghost doesn’t have to be black. In fact, it can be assembled in more than 44,000 colors available on the Rolls-Royce palette. Or even in a bespoke shade you dream up on your own.
“Bright ‘pop’ colors like Turchese, Mandarin and Tailor Purple are more and more popular, especially in the tropical environs of South Florida,” says Gerry Spahn, the head of communications for Americas Rolls-Royce Motor.

And while you can get one in an array of candy-coated hues, the new Black Badge Ghost ultimately celebrates the dark side of Rolls-Royce fans. A chic Darth Vader of cars, if you will. According to the brand, the vast majority of its elite clientele select black. In fact, to create what is the auto industry’s darkest black, Rolls-Royce atomizes 100 pounds of paint and applies it to an electrostatically charged body before its oven dried. Now that’s what we call “uber black.”

Kaleidoscopic concerns aside, South Florida is chockablock with what are known as “super luxury consumers.” While these unicorns are commonplace in the Sunshine State, the super luxury buyer is defined by Rolls-Royce as rebellious. The Black Badge Ghost is aimed at the most individualistic iconoclasts of that set — aka Miamians. What makes it so next-level? “Using light as design,” explains Spahn, “with the first-ever illuminated fascia extending the feel of the starlight headliner deeper into the cabin.” He also credits the technical fiber with aluminum threads that are woven throughout the cabin and carbon fiber wheels. “It adds a unique exterior complement to the blackened metal finishing,” Spahn continues. 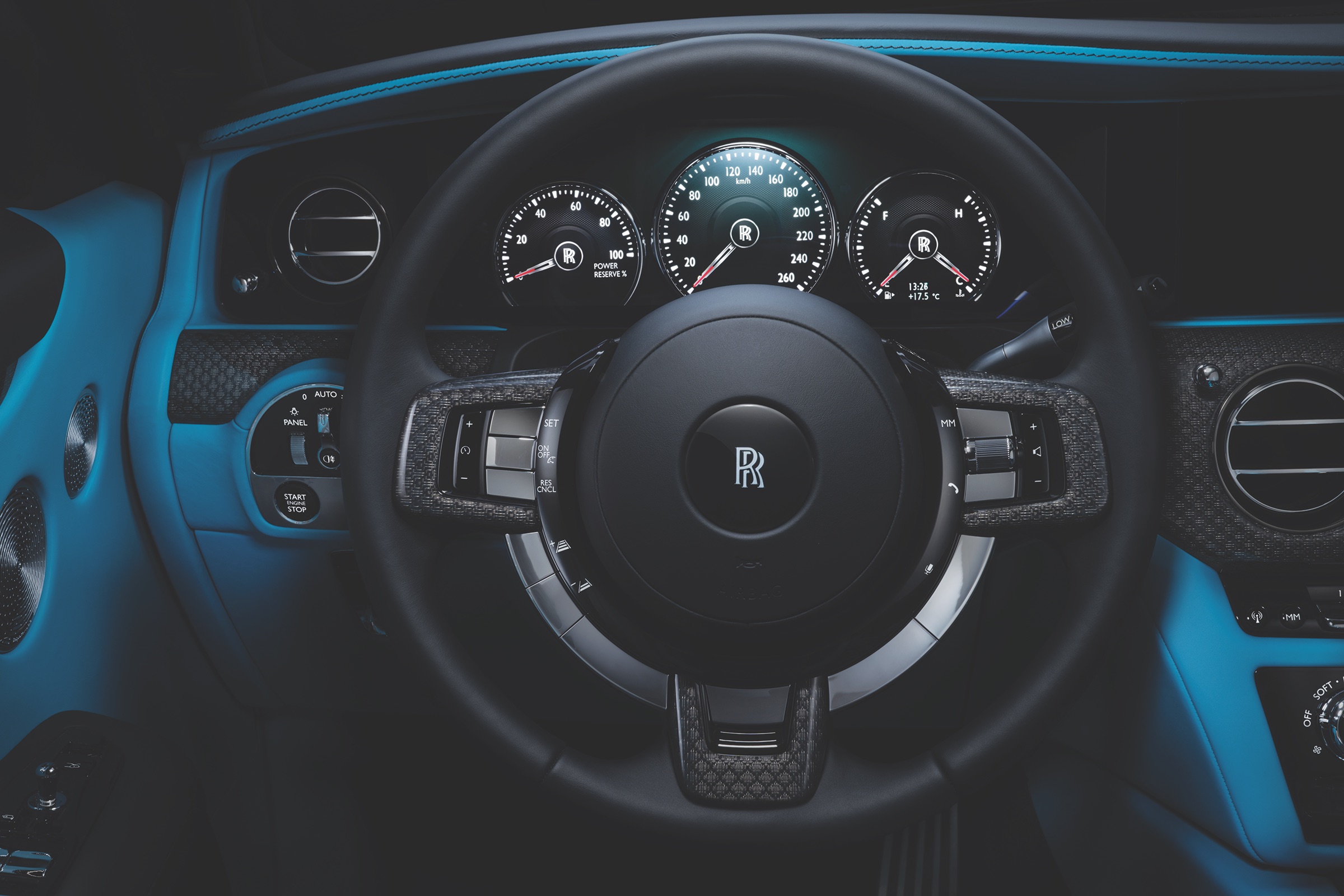 The Black Badge represents more than 27 percent of commissions worldwide for the British automaker. You’ll recognize it by its mathematical symbol, dubbed the Lemniscate. The Lemniscate represents potential infinity and is a design found throughout the car’s interior.

These posh attributes and those yearning to get their hands on that wheel align into a new cultural phenomenon best surmised by Alex Innes, the head of Rolls-Royce Coachbuild Design. The new buzz word for the Black Badge Ghost and the owner in pursuit of one is “post-opulent.” Innes believes there has been a shift toward reduction in the luxury consumer market. He notes that tastes have changed and the ideal patron wants fewer, but better things. Minimalism. Craft. Simplicity. That is lavish restraint.

Post-opulent design is subtle, unostentatious, and soft-pedaled, which doesn’t seem to intuitively support the ubiquitous South Floridian motto of “more is more.” However, don’t be surprised to see a neon purple Black Badge Ghost drive around Star Island or Golden Beach. This may not be an option for everyone. But for those into noir, Batman, or Tom Ford’s wardrobe, this is your ride.