With a global footprint and newly opened restaurant in New York City, Chef Daniel Boulud has a long and doting relationship with South Florida.

It was the first place I visited in America,” says Lyon-born Daniel Boulud in his charming French accent. The renowned chef was only 25 years old when he arrived in Florida in the early 1980s and rented a Toyota SUV. “The kind where you could sleep in the back,” he recalls. He drove across most of the state in it. 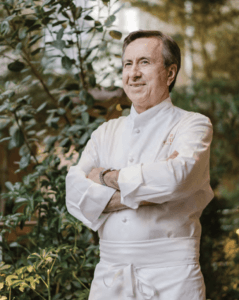 Daniel Boulud; on the menu at Le Pavillion

“It was easy to fall in love with Miami and Palm Beach village, especially,” he says. The now famed chef and cookbook author went from Miami to the Keys to the Everglades up to Orlando and Tampa and back. “I was staying in an RV camper park, and I went into this building and there were about 100 people sitting in silence. I had no idea what was going on. Turns out they were playing Bingo!” he chuckles. So, the soon-to-be-famed, two-star Michelin chef, Boulud sat down and learned how to play the game. These days it’s hard to picture Boulud wasting time with such banalities. Not the guy who has run the exquisite Café Boulud Palm Beach for the last 21 years in The Brazilian Court Hotel or Miami’s Boulud Sud and DB Bistro before that.

“My eyes were wide open because I was discovering America,” says the chef, who in November 2021 was named the world’s best restaurateur by Les Grandes Tables du Monde. “I knew even then that Palm Beach was a jewel,” he recalls. “It has always been a discreet and selective destination.” He credits the partnership with the Brazilian Court as integral to the restaurant’s success. I’m grateful to Adam Schlesinger for having the vision to build this boutique hotel 25 years ago,” says Boulud. “And I’m thankful for my team, who during COVID-19 was able to maintain staff, service, and our customers’ loyalty.” Indeed, many of those same clients in Palm Beach spend time at his restaurants in New York City. His global patrons are most likely reveling in his latest venture, Le Pavillon. The original Le Pavillon, run by Henri Soulé and opened from 1941 to 1972, was a bastion of the French dining scene in America. Boulud opened the ambitious vegetable and seafood-forward fine dining restaurant in May 2021. The Midtown spot was quite the daring launch, but Boulud felt the timing of the opening was critical. “Broadway and all the cultural things were still shut down. People needed something new and exciting to happen. It’s wonderful to be part of a restaurant that will outlive me. Le Pavillon will be here for the next 50 years.”

This is not the only project Boulud has been working on with major staying power. Café Boulud will open in The Mandarin Oriental Residences in Beverly Hills sometime in 2022. He’s also opening a small, high-end Japanese restaurant at NYC’s One Vanderbilt with a well-known Japanese chef. Still, Le Pavillon is the one that feels the most personal to him.

Housed in a $1.6 billion tower connected to Grand Central Station, it took five years to bring Pavillon to fruition. “The restaurant was quite challenging and is quite striking. It has beautiful views of seven New York landmarks and overlooks Grand Central. Le Pavillon is an oasis in this concrete jungle,” says Boulud. Indeed, 50 percent of the space is a living garden. “And,” he laughs, “a lot of the trees come from Florida!”