Tim Gunn, the ever-charming fashion authority, continues to champion young designers while calling out his industry on its shortcomings. We speak with Gunn about fashion’s next chapter, pajamas out in the wild, and what it’s really like working with Heidi Klum.

Everyone was obsessed with “Making the Cut.” Was filming season two radically different than season one? Other than featuring abundantly talented designers, seasons one and two couldn’t be more different. In season one, we traveled around the world, literally. New York, Paris, Tokyo, and back. Our intention was to visit fashion capitals of a diverse nature and use their cultural richness for inspiration for the designers. Our plans for season two followed this same template. Then came the pandemic, and our plans were thwarted — no travel of any kind. Accordingly, we found a spacious ranch in Malibu that offered different locations, a large indoor/outdoor studio space, and accommodations for all 100 of us. Now that the season is out and streaming, I can proudly assert it worked!

Speaking of the pandemic, I’ve seen all those pajama-clad people in the airport and grocery stores. Do you believe Americans are ready to ditch their loungewear? This old fuddy-duddy is making a declaration: with the exception of a fire in the middle of the night, pajamas should never leave your home. How did it happen that people began to think that sleepwear can go anywhere? I suppose it’s equivalent to the legging-as-pants phenomenon. I still scratch my head in disbelief. I fully subscribe to clothes being a form of semiotics; that is, the clothes we wear send a message about how the world should perceive us. This is a long-winded way of saying I hope we can bring some sobriety to how we present ourselves to the world. We look our best when our clothes fit us.

You’ve been outspoken about the industry not being inclusive enough. Is that changing in any real way post-pandemic? I’ve never understood the fashion industry’s shunning of inclusivity. When I became chair of the fashion department at Parsons in August 2000, I observed that all of the dress forms in the studios were sizes 4, 6, 34, and 36. It caused quite a stir when I brought in larger sizes. It’s relatively easy to design for tall, skinny people, because practically anything looks good on them. It’s an altogether different challenge when you embrace inclusivity. Yes, the industry is definitely getting better, but it still has a long distance to go.

How were your hosting duties with Heidi different on “Making the Cut” than on “Project Runway?” “Making the Cut” was the show Heidi and I dreamed of doing. We have the greatest affection for “Project Runway,” but the show’s success was an obstacle to change. When “Runway” began, it was seminal; it was on the cusp of the rise of young, entrepreneurial designers, and the show was all about supporting that. The fashion industry has evolved considerably since the show’s beginning. Today, it’s not just about a pretty dress. It’s about a larger rubric of moving parts: design, certainly, sourcing and production, marketing and public relations, team management, and — hovering over all of this — branding. Those elements define “Making the Cut.” Furthermore, on “Project Runway,” Heidi and I had such separate roles that we were rarely together on camera. On “Making the Cut,” we were joined at the hip!

You and Heidi have such great chemistry. How has your relationship evolved over, what is it, 17 years? We taped the first season of “Project Runway” in 2004. So, yes, 17 years! In the beginning, I was terribly shy and deferential to everything pertaining to Heidi and her supermodel stardom. By the way, she’s even more breathtaking in person. Over the years, I’ve become more relaxed — and confident — in her presence, to the point where we’re really like an old married couple. 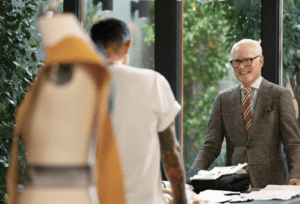 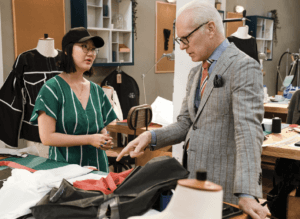