A Renaissance man, fashion designer, and artist extraordinaire, Oscar Carvallo is a creator for all seasons.

Oscar Carvallo’s creative talents have taken him from Caracas to Milan to Paris to Miami, where his studio continues to attract the most discerning of clients. For a designer who presents at the couture shows in Paris, his list of clientele include celebrities, debutants, and VIPs. The multihyphenate is now adding the title of “artist” to his resume with a recent run of an icon-inspired exhibit at Château des Tourelles in the French capital to prove it.

“Art has changed my life. I wake up with the need of painting,” says the accomplished couturier, who also helms a Parisian atelier. “Sometimes, I cannot sleep thinking about the process. Being an artist is being a dreamer, and our goal is to make people also dream.” 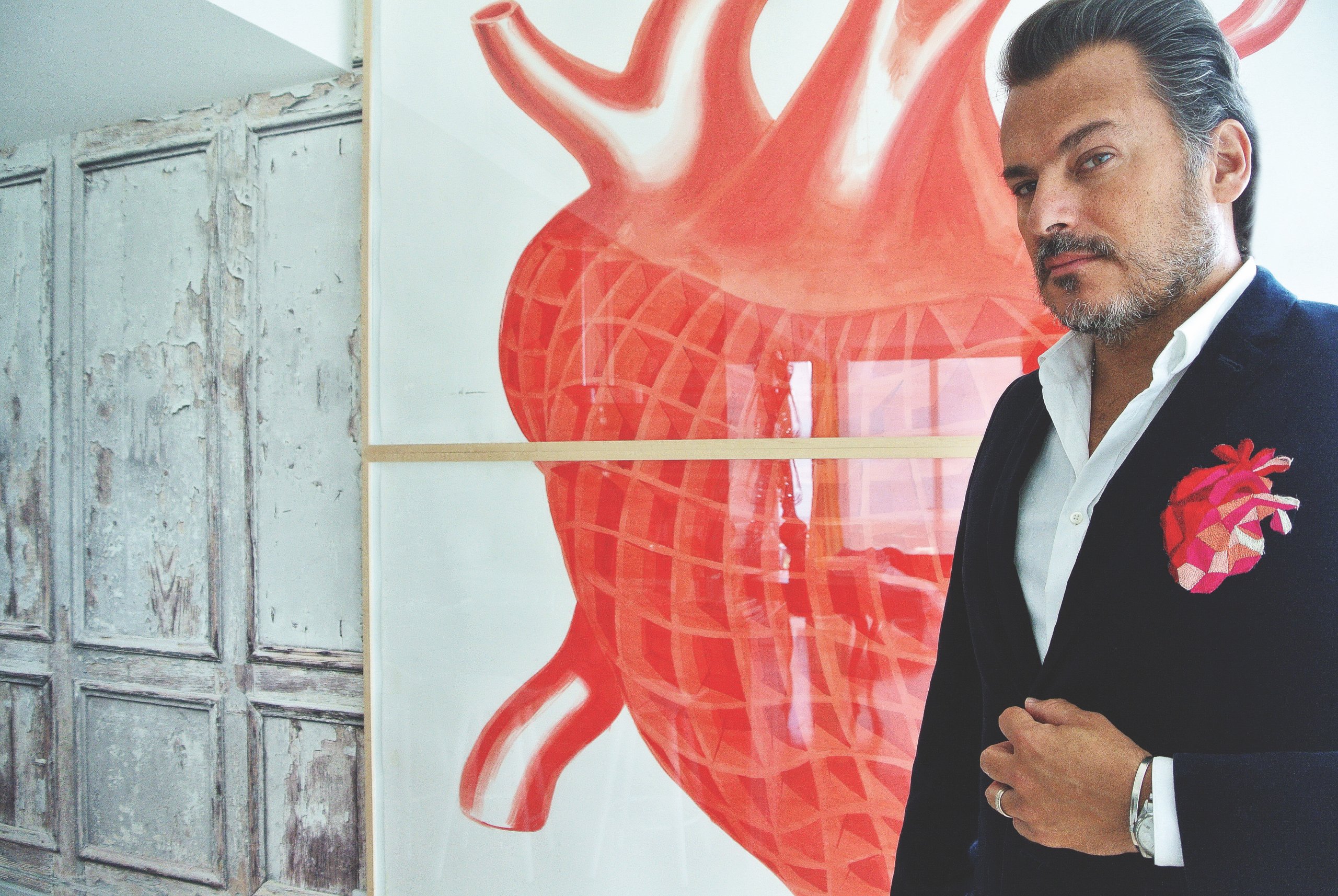 It’s not the first time Carvallo has made a leap into a new career. “I finished law school. From the law, I went into fashion.” He abandoned law and entered a master’s design program at Domus Academy Milano, planning to live in Milan permanently. However, “life is full of surprises, and we are the drivers of our own luck,” says the Venezuelan native. His fashion career moved him to Paris instead, where he didn’t know the culture or the language. Eventually, Carvallo decided he wanted to move to the Magic City. “Miami was an experience I wanted to have, and it was fantastic,” says the Renaissance man. “It feels familiar. My family has lived there for many years and, of course, there is the sun and the sea. I miss it so much.”

The pandemic motivated Carvallo to move back to Paris. “It is my home now,” he admits. “Europe is the center of art and creation, and I have to be surrounded by inspiration every day.” His inspiration has found a new oeuvre. And this iteration has little to do with fashion. Carvallo is consumed with paintings done in the Fayum technique, synonymous with the Egyptian portraits of the pharaohs. Later, the technique was adopted by ancient Greek artists. Carvallo references encaustic painting in his works, which incorporates melted wax on canvas. It’s a technique later made famous by Jasper Johns.

This latest endeavor differs greatly from his couture days. “With fashion, I need a huge team to make it possible,” he explains. “Painting is just the canvas and me.” Fortunately, the dashing creator hasn’t abandoned his fashion aspirations and has managed to weave style into art. Carvallo still works with couture clients all over the world, who are very much part of his process. “I have never had a muse as one person. I think every client I make a couture dress for is the muse of that moment.” That’s why he rejoices in designing wedding dresses. “They are pure fantasy and magic where you have the chance to make people dream,” he adds.

Not surprisingly, his fashion spills over into his art. “I usually paint my models from my collections, but they are just a starting point,” Carvallo explains. “During the process of painting the models become magical pharaohs of the first century.” The process is a true fusion of a multitude of his passions that magically transcend geography, style, and, in many ways, time itself. “To be inspired by the present time, that goes back to the past,” he says, “and to finally arrive at a result of the future.” And whether it’s on a canvas or a body, Carvallo’s work is pure magic.