The sun is beginning to set over rolling hills and a canopy of grapevines in Chianti, the Tuscan wine region stretched between two medieval cities of Florence and Siena. Its copper hue cloaks over the vast patches of linden trees and cypresses swaying to an afternoon breeze that clears summer’s stifling heat. Olive groves and neatly lined up vines as far as the eye can see. Cliffside roads are narrow and windy here; traffic signs point to the impending danger should the bewitching scenes of unbearable beauty seduce travelers with a case of a wondering gaze. With GPS’ capriciousness at its worse, getting to Lamole di Lamole Estate, a hillside winery dating back to mid-fourteenth century, is not for the faint of heart. But much like the complex and lively wine it produces, a visit here is worth the all-sensorial and, at times, taxing journey.

Beatrice Marino, estate’s wine expert and guide, sympathetically excuses my delayed arrival and motion sickness induced nausea. “Don’t worry. The road is not easy, and we are difficult to find,” she says and quickly switches to the matter at hand. Sangiovese, aka the local grape. A little on this multifarious varietal that defines the hills of Lamole, renowned as one of the cradles of fine Chianti. Derived from the Latin for ‘blood of Jove,’ or ‘Jupiter’s blood,’ Sangiovese is Italy’s most planted red grape and is grown as far south as Campania and Sicily and as far north as Lombardy and the Veneto. Yet despite of its ubiquity, Sangiovese is quite scarce outside of Italy. A fussy grape to grow, it can produce lively, almost fizzing young reds with juicy, cherry flavors, as well as more concentrated, long-lived, oak-matured reds with superb, savory spice flavors and great finesse. Such is the case with Lamole di Lamole’s wines which, as I will discover at the end of my visit, deliver vigor and intensity in spades. 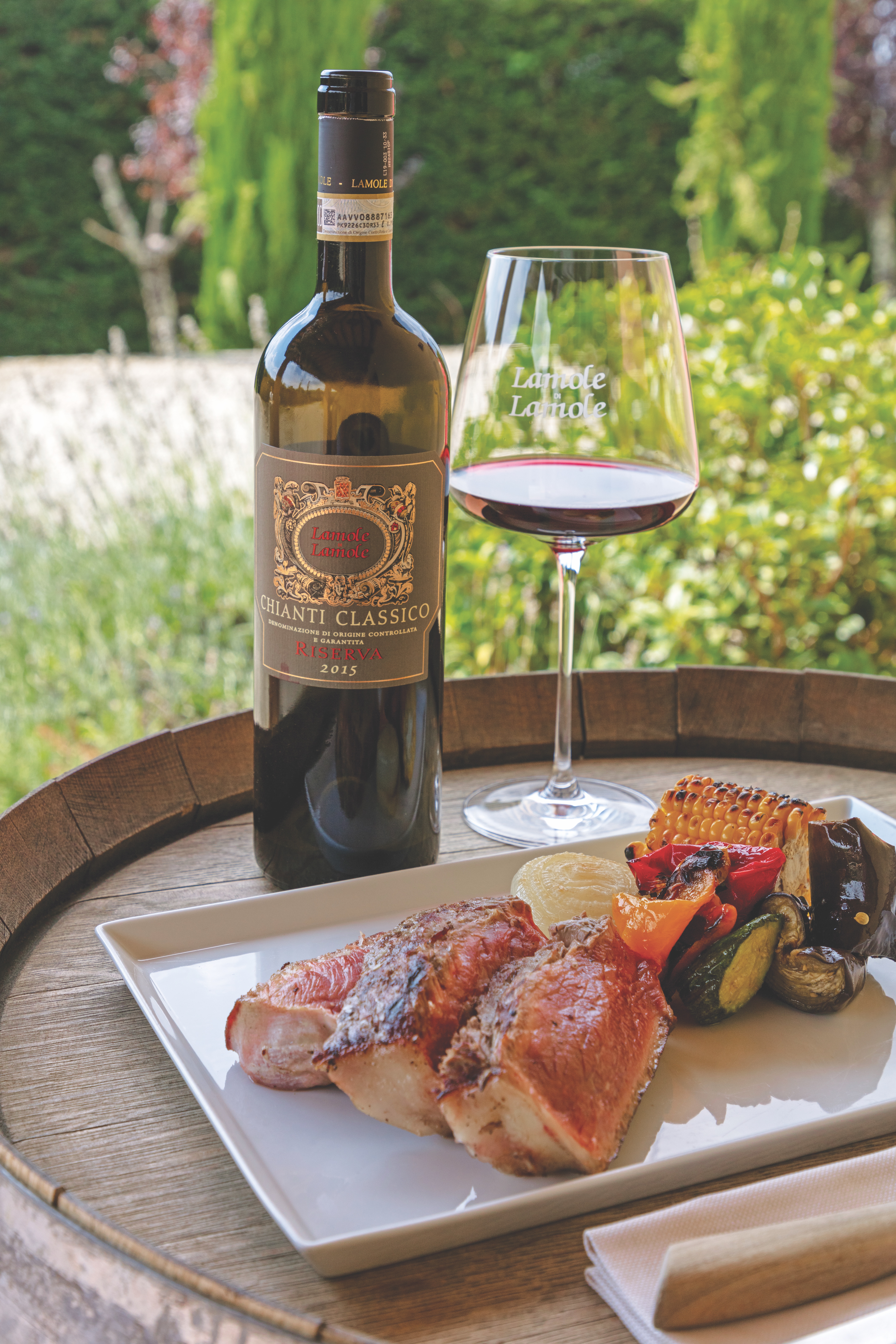 Since Roman times, the fertile land here has been prized and guarded for its flavorful crops. In the Middle Ages the Gherardini family from Florence built a large castle to control the area. The fortress now lies in ruin, except for its cellars, which are used to store the barrels and where Lamole di Lamole wine undergoes its maturation process. What’s behind the profile of one of Chianti’s most revered terroirs? In the great sea of clay that covers the central Tuscany, Lamole is an unexpected island of diverse stones and sand that mix together into a chaotic, yet fecund polychrome soil contained by miles of dry-stone walls. The bulwarks’ function is vital. Not only do the walls stop erosion of soil; they reflect sunlight that stimulates photosynthesis and retain heat throughout the night. “The sun and ventilation at this altitude makes even ripening and prevents dehydration of the grapes,” Beatrice explained encouraging me to taste the berry directly from the vine. The results are indeed sweeter and richer in acidity, yielding a Chianti that is well tempered yet filled with moxie.

The entire production process is equally remarkable. Viticulture at Lamole di Lamole is organic and thoughtful. Grape picking is meticulous, made even better with usage of optical scanners. The organic compost used is derived from vine prunings and stalks and the stimulation of vines’ immune system is a result of natural alchemy that involves seaweed, aloe and propolils. Ageing in wooden barrels takes place inside of vessels that are larger than usual, resulting in a reduction of wood’s intrusion on wine’s profile. The vineyard is constantly buzzing with activity. “Lamole is a small village and seems everyone who lives here works here, too,” Beatrice adds.

Of the estate’s three variations of Chianti Classico, she likes the Riserva the most. And I have to agree, but for a very different reason. Its restrained bouquet and floral finish will go very well with the wild boar ragu I intent to devour at one of the restaurants I spotted on my way up to the village. “For this wine we only use local Sangiovese and Canaiolo grapes, so the Riserva feels like the most honest and humble expression of this area,” she explains pointing out that the other wines contain non-native berries like the stern Merlot or the hefty and tannic Cabernet Sauvignon. “Riserva really feels like it’s the people of Lamole in a bottle,” Beatrice adds, and I sense she hopes I understand her humor. Which I do. It’s getting dark and misty and connecting the landscape’s grandeur, peppered with flickering lights of nearby villages, to anything “humble” is a challenge. Much to my epicurean delight the Riserva Beatrice pours into my tasting glass tastes deeply personal and genuine, a fitting homage to the land of its origin. 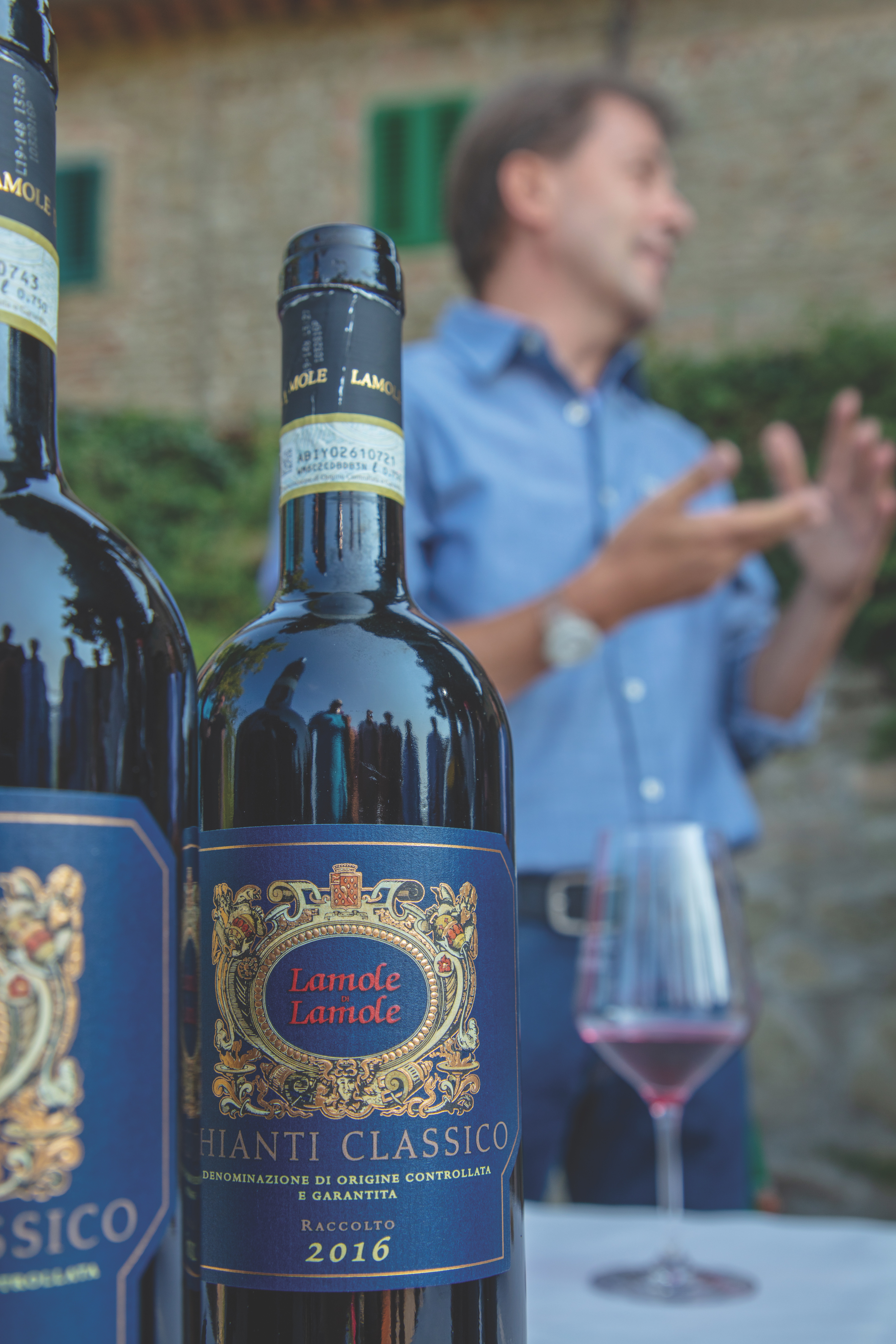