The act of creation is inspiring for many reasons. The following brands and individuals, with a solid South Florida footing, understand and execute the process all too well. 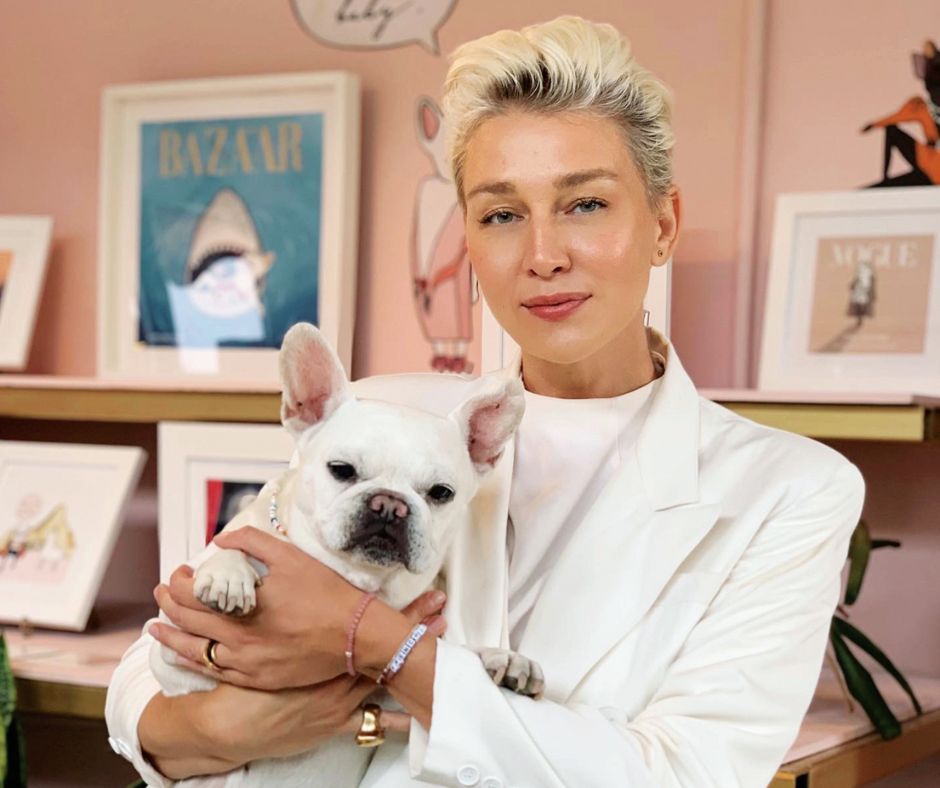 Moscow-born Valeria Krasavina is the type of artisan that refuses to be categorized. The prolific tastemaker is a fashion designer, an illustrator, a budding lifestyle doyenne, and a through-and-through creative who doesn’t turn inspiration away. “I think that when you are a creative person, there is always more than just one outlet for creativity,” says Krasavina. “Discovery is just so much fun.” In matters of style, there’s her Daydream Collection, a line of conceptual womenswear defined by asymmetrical tulle tops reminiscent of ballet tutus. “I came up with the concept while playing in my studio, and I developed unique techniques, so every piece is made to order by me,” she explains. “The first top I made reminded me of a flower, which I’ve always found endlessly inspiring.” For all her other efforts, there’s Fine Frenchie, a retail platform inspired by her pet bulldog where shoppers can find limited-edition prints, silk scarves, candles, pillows, stationery, and wallpapers. Regardless of the endeavor, the common thread through them all is Krasavina’s joyful spirit. “I want to inspire people, make them laugh and feel connected [to me],” she says. “That’s why you see so many positive and encouraging messages throughout my merchandise.” As she continues to explore outlets for her artistic energies, Krasavina is certain of one thing: She’s in the right place at the right time. “Miami is definitely very inspiring,” she says. “I love how diverse the city is, mixing all these cultures together. I’m excited to be part of it and its future.” 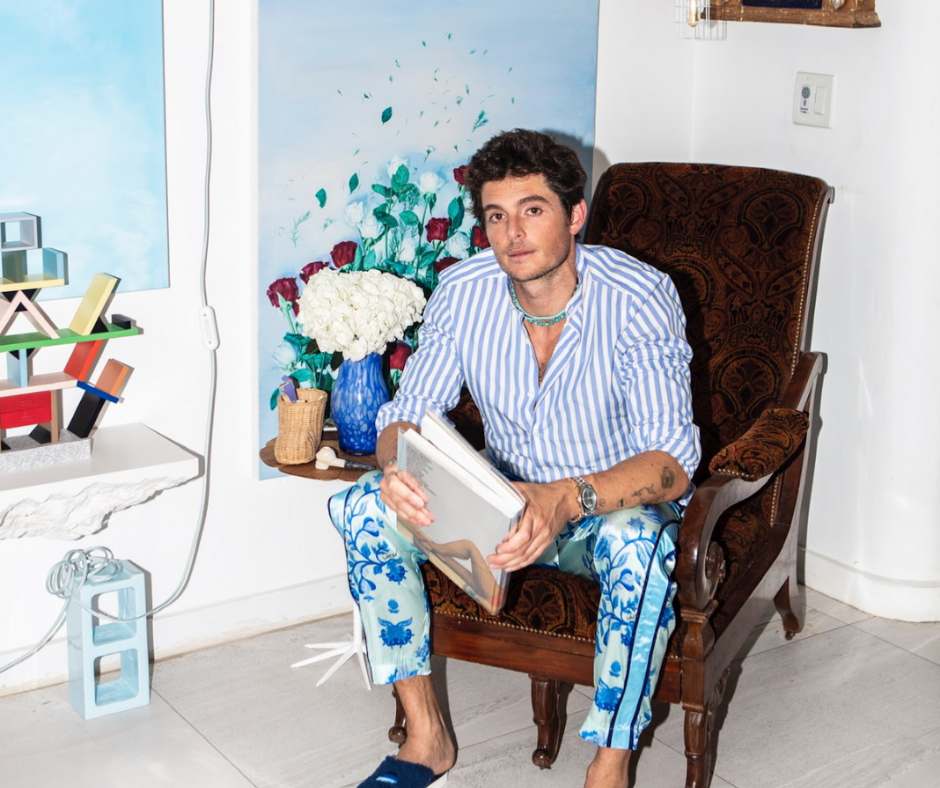 It’s not by coincidence that The Office, an art platform with brick-and-mortar presence in the Miami Design District, doesn’t follow the traditional gallery model. Its co-creator, Matthew Chevallard, has always been one to do things his way. He made his own rules when, at just 19 years old, he launched Del Toro, a luxury line that reflected his love for statement footwear. And he did things his own way again with the debuts of Blu Scarpa in 2019 and Concetto Limone in 2020, two brands that hint at the fact that his penchant for shoes may border on obsession. Apart from his business endeavors, Chevallard’s personal pursuits and hobbies further reveal a rather inclusive ethos. When asked what his interests are when it comes to art, he’s hesitant to commit to an answer: “That is a loaded question. Contemporary art to be vague, but my focus is centered around Arte Povera and emerging contemporary art in America. I’m just passionate about art in general and buy what I love.” This reverence for free-thinking and rebellious creativity has served him well at The Office, a forum that adds value to the emerging artists they work with by not representing them, but rather by helping them place their works in collections they otherwise wouldn’t be in. It’s through The Office that he’s scored his latest master stroke, exclusive East Coast representation of a curated selection of Memphis Milano works, a movement started in Italy in 1980 by the architect Ettore Sottsass that achieved iconic status almost instantly and has only remained more appealing ever since. Characterized by a mishmash of styles and irreverent spirit, the pieces are a befitting addition to Chevallard’s oeuvre and fit right in with Miami’s anything-goes attitude. Beyond the Memphis Milano coup, Chevallard’s focus remains on The Office’s goal. “Our mission is to connect emerging artists to our high-valued clients,” he says. “We are providing a service to guide collectors across many backgrounds to help them find their own eye and avoid regrettable acquisitions.” theofficemia.art

Back in 2008 when Paloma Teppa revealed her charming Plant the Future terrariums to Miami, minimalism still had its hold on much of the city, but our tastes were beginning to thaw. Teppa helped us along with her approach to biophilia, one marked by succulents, cacti, and other arid specimens planted on soil, gravel, and rocks, and sometimes interspersed with figurines of bunnies, gorillas, and horses. Overnight, or so it seems now, her compositions became the arrangements of choice for tastemakers in the know. It was a genius concept when you think about it: Teppa used her green thumb to ensure those who collected her live installations didn’t need one. As with all great ideas, imitators soon followed, but that Plant the Future essence was impossible to copy. We now see Plant the Future’s evolution on murals all over the country and collaborations with leading brands such as Lladró, but the Wynwood-born original will always have our heart. plantthefuture.com.

As the geniuses at Sub-Zero see it, a refrigerator offers a chance for both practicality and panache. Recently reimagined, the 48-inch refrigeration system (in either the Classic Series’ iconic stainless-steel grille or the Designer Series’ “disappearing” version) has been a staple in the kitchens of well-heeled aesthetes for as long as we can remember. But even an icon can use a reinvention. The fresh new features nod to next-generation bells and whistles, with innovations that include an intelligent climate system for more effective cooling, a touch control panel to customize settings, stainless-steel accents in the interior, nano-coated glass shelves with spill-containing abilities, LED lighting that illuminates all contents no matter how packed the ice box is, a night mode that adapts to dim environments, a flip-up dairy compartment for taller items, and a NASA-inspired air purification system that scrubs the air of ethylene and odor every 20 minutes. A breath of fresh air? You can say that again. subzero-wolf.com 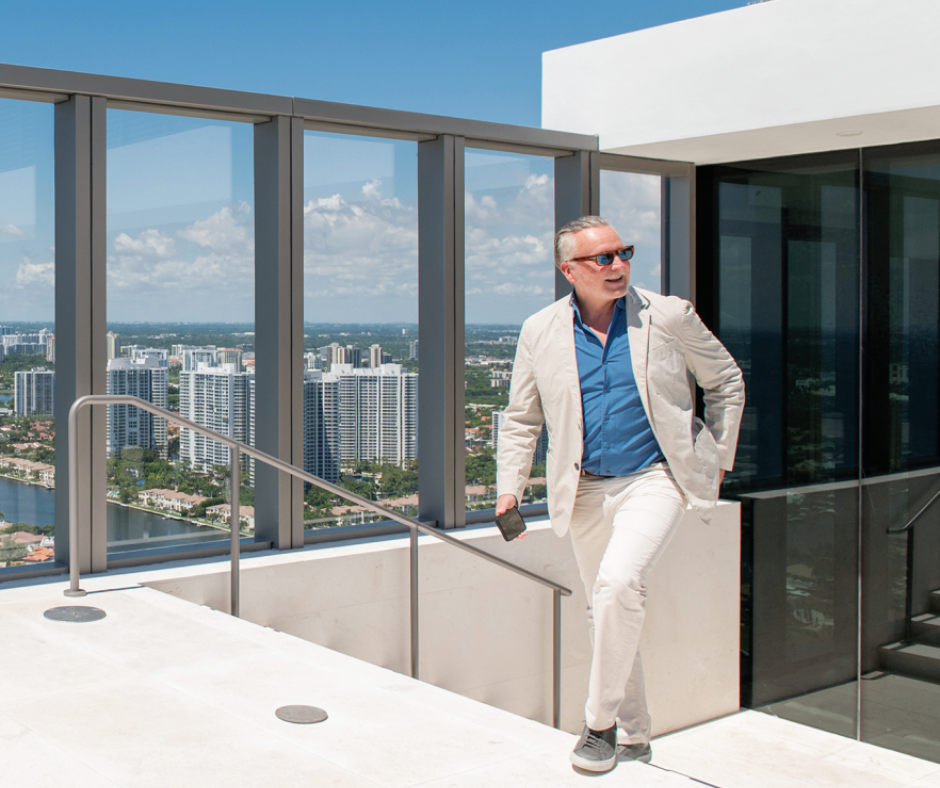 There can’t be talk of Miami’s bullish real estate market without including Shahab Karmely in the conversation. The founder and CEO of KAR Properties has made it clear he’s here to play in the big leagues after committing more than $300 million into the local market with acquisitions and investments in established and emerging neighborhoods. The crown jewel in his portfolio is One River Point, what Karmely calls a “functional living” residential compound that will rise in the only private gated park in Downtown Miami. The behemoth will encompass two 60-story glass towers with the five-star trappings six-figure real estate demands these days: architecture by Rafael Viñoly, residential amenities by B&B Italia, and Miami’s first floating sky club by Adrian Zecha. When prompted for what makes ORP special, Karmely is succinct and to the point: “We have achieved a new plateau in urban living.” The undertaking is ambitious to say the least, but one Karmely is well-equipped to see through. The man has carved an illustrious career by championing and executing innovative and inventive real estate concepts throughout Southeast Asia and Europe. He first zoned in on Miami (a city he likens to Singapore in the 1980s) upon hearing about Swire’s plans for Brickell City Centre and then seeing how the mall galvanized Brickell. “Miami is one of the western hemisphere’s most beautiful cities with unparalleled access and infrastructure,” says the developer. “My first espresso of the day, as I take in the sun and air, is when I get to appreciate this beautiful city.” Karmely is betting big on said charms not just with ORP, but also with two additional multi-use towers in ORP’s vicinity and a residential building in Wynwood — not to mention 2000 Ocean, another blue-chip condominium structure across the county line in Hallandale Beach. “Luxury is the art of blending the aspirational with the essential in a harmonious package,” says Karmely. “Our projects aim to bring together the inspirational and the functional into a balanced final project that elevates the living experience.” karproperties.com

French designer Nicolas Triboulot considers himself fortunate of being a self-taught artisan, as that lack of formal education allowed him to pursue ideas without preconceived notions or baggage. Said approach served him well at Baccarat, the brand where he began his career and for which he would go on to design more than 200 items. In 1983, Triboulot’s fascination with techniques and technology led to the creation of the Eye Vase, his so-called “ode to light.” Bold and architectural, the piece’s juxtaposition of horizontal and vertical planes allows it to refract like a precious stone for the type of visual effect we’ve come to expect from Baccarat. This shining example of upscale taste and imaginative curiosity has become a mainstay in Baccarat’s inventory since its debut. us.baccarat.com

When Artefacto launched itself into the American design market with its first Coral Gables showroom in 2002, it did so loudly and without apology. In just a few years, the Brazilian company became synonymous with genuine South American craftsmanship and ingenuity, and it was because of items like the Caixa Bar Pietra, a standout example (from its latest collection) of Artefacto’s organic design approach. Hand-assembled in the firm’s São Paulo factory, the cabinet brings nature indoors with its solid Brazilian wood frame, Grigio marble handle, and polished steel internal framing. Inside, the piece is equipped with refrigerated drawers and LED lighting to function as a cocktail bar, a coffee counter, or both. It’s the ideal companion to celebrate Artefacto’s 45th anniversary as a third-generation, family-owned brand dedicated to modern luxury. artefacto.com. 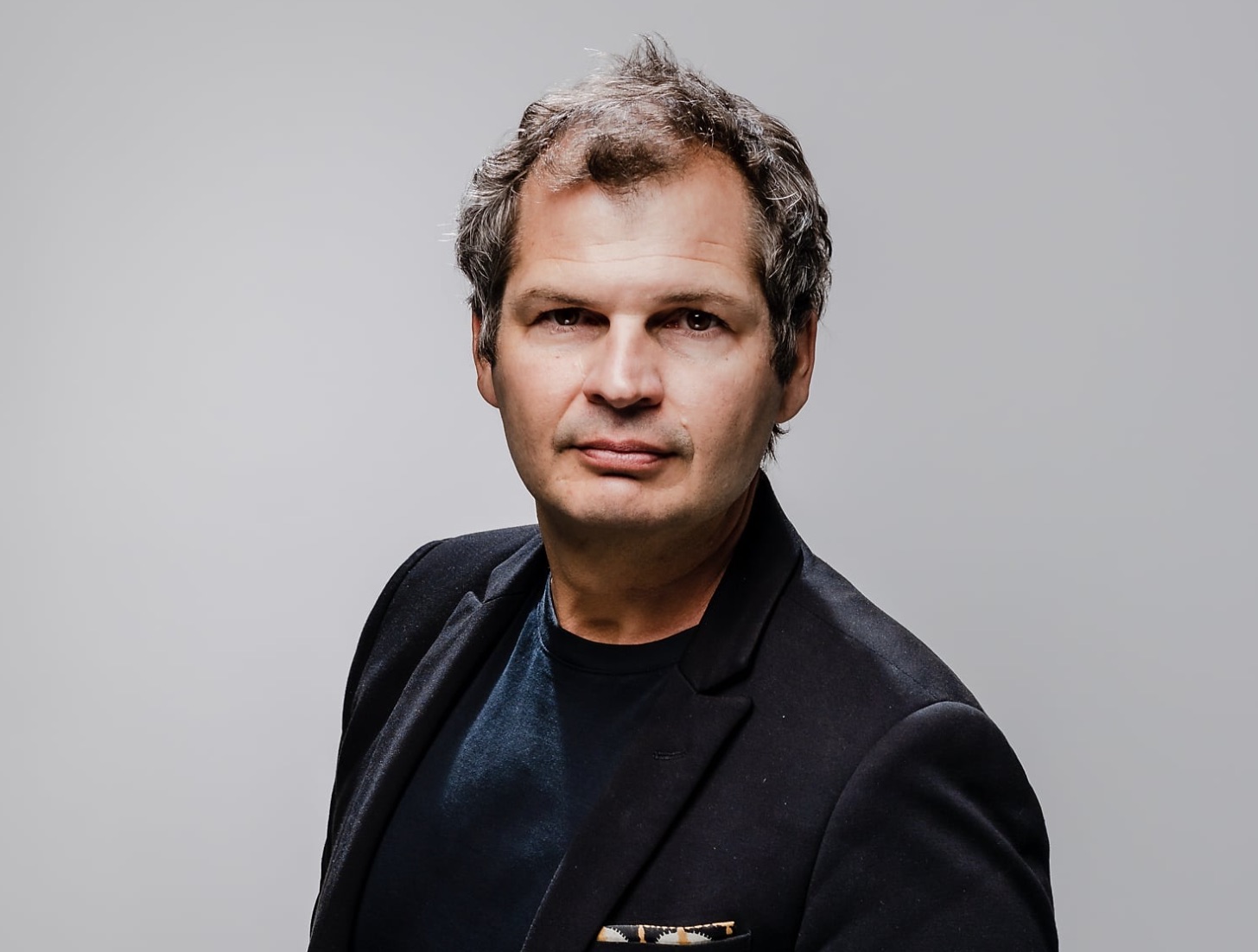 It’s safe to say Max Strang was born to design. A childhood spent in a Winter Haven home designed by the late great architect Gene Leedy, one of the leading practitioners of the Sarasota Modern style of architecture, instilled an interest in structure and its ethos from early on. “The house was this amazing assemblage of concrete and glass,” he says. “Those architectural spaces had a powerful impact on me as a young kid.” So powerful, in fact, that the Sarasota Modern principles would become a guiding force in the development of Strang’s aesthetic sensibilities. “The movement is internationally recognized as a high point in American architectural history,” says Strang, a published author on the subject. “It brilliantly captured the optimism and enthusiasm of the post-war era. These buildings had to respond to climate and site in a manner that most people don’t even think about today. I remain inspired by those timeless lessons.” Inspired is right. At his Miami practice, Strang and his team incorporate the main tenets of the movement and adapt them to 2022 sensibilities through work he describes as “environmental modernism.” His firm’s winning approach has garnered fans all over the world, various accolades from the Florida chapter of the AIA, and editorial love from major publications. All this further solidifies Strang’s position as a seasoned professional with a keen understanding of his industry. “I believe that unique designs always result when you approach each project with an open mind and respond to the local site and characteristics, and listen to your clients,” he says. “I am committed to this.” Words to live by — literally. strang.design.