Jewel on the Bay

At the record-breaking price of $150 million, business leader and philanthropist Adrienne Arsht offers her spectacular waterfront property to Miami’s next history maker.

Affectionately known as the “Embassy of South Florida,” Adrienne Arsht’s spectacular Miami waterfront estate overlooking Biscayne Bay earned its jaunty tag thanks to the many gatherings of glitterati she has hosted there over the decades. Situated just north of the famed Vizcaya Museum and Gardens, Arsht’s sprawling Mediterranean-inspired five-bedroom manse was designed in 1999 by former Dean of the University of Miami’s School of Architecture Jose A. Gelabert-Navia. Now known as Indian Spring, the approximately 15,000-square-foot home’s gracious public spaces were clearly designed with lavish entertaining in mind.

A sister structure on the compound, known as Villa Serena, served as a similarly vibrant setting for a multiplicity of functions when it was occupied by influential politician William Jennings Bryan from 1913–1924. Today, Arsht’s entire estate — comprising the two dwellings, a pair of guesthouses, and a medley of accessory structures set upon 4+ acres with 400 feet of waterfront — is on the market for $150 million, breaking a record as the priciest property ever listed in Miami-Dade county. “When the wealthiest Americans were coming to Florida in the early 20th century to build winter homes, this part of Brickell Avenue along the bay was the most desirable place to be — as it still is,” says listing broker Ashley Cusack, senior vice president of Berkshire Hathaway HomeServices EWM Realty. “It’s almost impossible to find this magnitude of a property in a central location on the water anywhere in Miami.”

Indeed, the property’s extraordinary location, as well as its world-class amenities, justify its lofty price tag. The pedigree of its lovely Villa Serena, which adds an extra layer of luster to its legendary appeal, is the icing on the cake.

Villa Serena was originally built by Jennings Bryan, a former U.S. Secretary of State under President Wilson and three-time presidential nominee, as a winter getaway home. After settling here permanently, Jennings Bryan not only served as a key supporter of developer George E. Merrick but also contributed to the founding of the University of Miami.

Set atop a 12-foot limestone bluff of the Atlantic Coastal Ridge, the 5,800-square-foot, U-shaped, three-bedroom home is one of a handful of remaining mansions along this stately stretch of Brickell Avenue. Framed by four two-story corner towers crowned with hipped roofs, the concrete and stucco dwelling faces a central courtyard and opens in the rear to magnificent views of the bay.

Recognizing the architectural and historical significance of the jewel she had purchased, Arsht spent four years and millions of dollars restoring the structure to its former glory. In 2012, it was listed in the National Register of Historic Places. Arsht sees the moment as right to hand off this glorious reminder of Miami’s Golden Age to a new ambassador. “Being the steward of such a magnificent haven has been a true honor,” says Arsht. “This property has been the cherished site of some of our country’s most memorable gatherings. It is without a doubt, a one of a kind and so quintessentially Miami.” True to form, the benevolent Arsht has promised to donate proceeds of the sale. 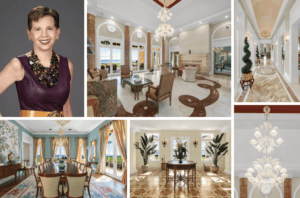