LVMH’s first hotel in Paris mixes reserved elegance with modern temper for results that are sublime in execution and extraordinary in grandeur.

Lauded for its position within some of France’s most prestigious enclaves — notably St. Barths, Courchevel, and Saint-Tropez — this past September the Cheval Blanc Maison took its first urban turn straight into the heart of Paris. Far from the Golden Triangle of the 8th arrondissement, Cheval Blanc Paris aims to prove that luxury hospitality isn’t solely dictated by its district. This plush address set within an Art Deco building overlooks the Pont Neuf, Paris’ oldest and most celebrated bridge dating back to 1607. In contrast to the neighboring Belle Époque department store, La Samaritaine, where pomp meets play and over 600 luxury brands invite admiration, LVMH’s first hotel to open in the French capital evokes a more contemporary spirit.

The spacious sunlit lobby of this living masterpiece imagined by the renowned New York interior designer Peter Marino was outfitted to complement a large blue abstract canvas by the French artist Georges Mathieu, painted circa 1978. Vibrant works by Brazilian-American artist Vik Muniz decorate another wall while retro-style couches are accented by the hotel’s signature golden hues. The art tour continues with lithographs by Sonia Delaunay lining the upper hallways leading to the 72 rooms — most of which are suites boasting views of the Seine. Front row seats from an enclosed winter garden offer a glimpse into Parisian life, with the hum of motorbikes and gliding riverboats providing the distant soundtrack.

A destination for gourmands with the most discerning taste, Cheval Blanc Paris hosts four restaurants, including Milanese hot spot Langosteria, where both the cuisine and the staff are authentically Italian. In culinary contrast, Michelin-starred chef Arnaud Donckele sets a poetic French scene at restaurant Plénitude. A sweet and savory story with bread at the helm is told by chef Maxime Frédéric at the more laid-back Limbar, which transforms into a sleek bar by night. High up on the seventh floor, brasserie Le Tout-Paris buzzes with life from its modish interior to the vast terrace capturing bird’s-eye views of the City of Light.

Below ground, the Dior spa invites guests into a haven of hedonism with 43 face and body treatments, some inspired by the Dior Prestige line. With a bathrobe fashioned in Dior style and a beauty ritual including Couture Dream, mode is omnipresent. The 30-meter-long swimming pool at Seine level hypnotizes with undulating waves of blue and green mosaic tiles while scenes bordering the river are projected along the walls. The latter, a work by Franco-Israeli artist Yorame Mevorach, also known as Oyoram, reveals the pulse of Paris that, much like the hotel itself, will leave a lasting impression. 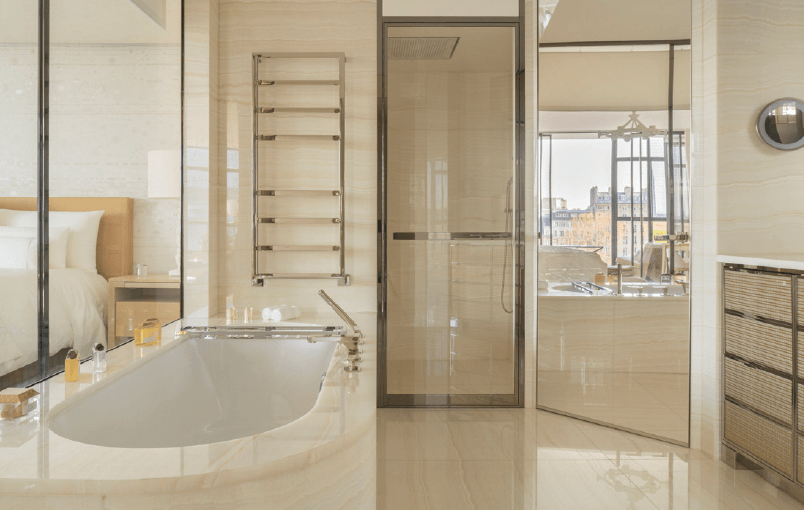 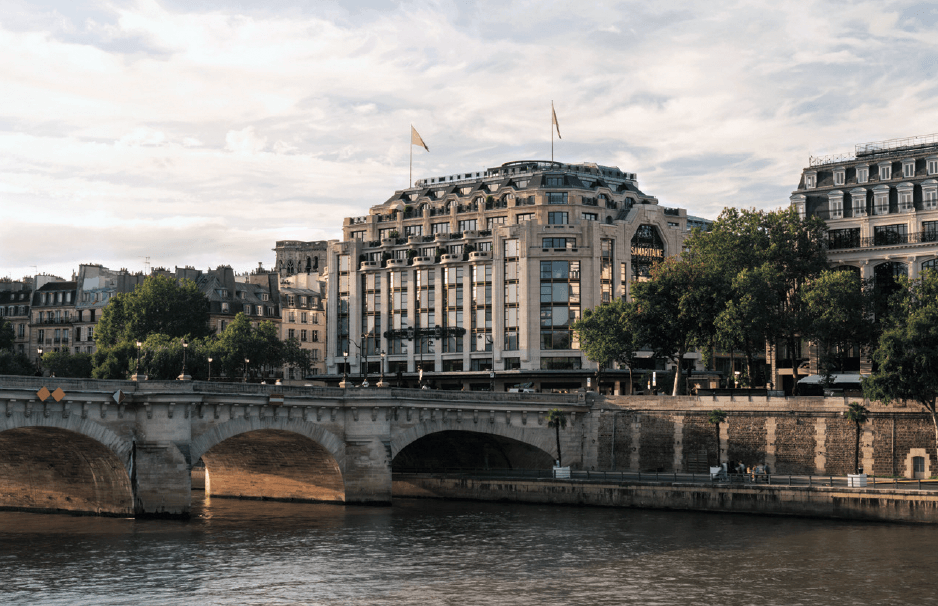