Tracking Jean-Louis Deniot’s list of ongoing projects is a little like scanning a map of the world. Since founding his Paris-based architecture and interior design firm almost two decades ago, the French designer has become an international design star — with high-profile projects worldwide. His eclectic yet luxurious interiors have more recently attracted the attention of international developers, who have tapped him to bring his fresh approach to design — filtered through his classical training — to more expansive projects, including the renovation of the legendary Waldorf Astoria Hotel and its new residential towers in New York. 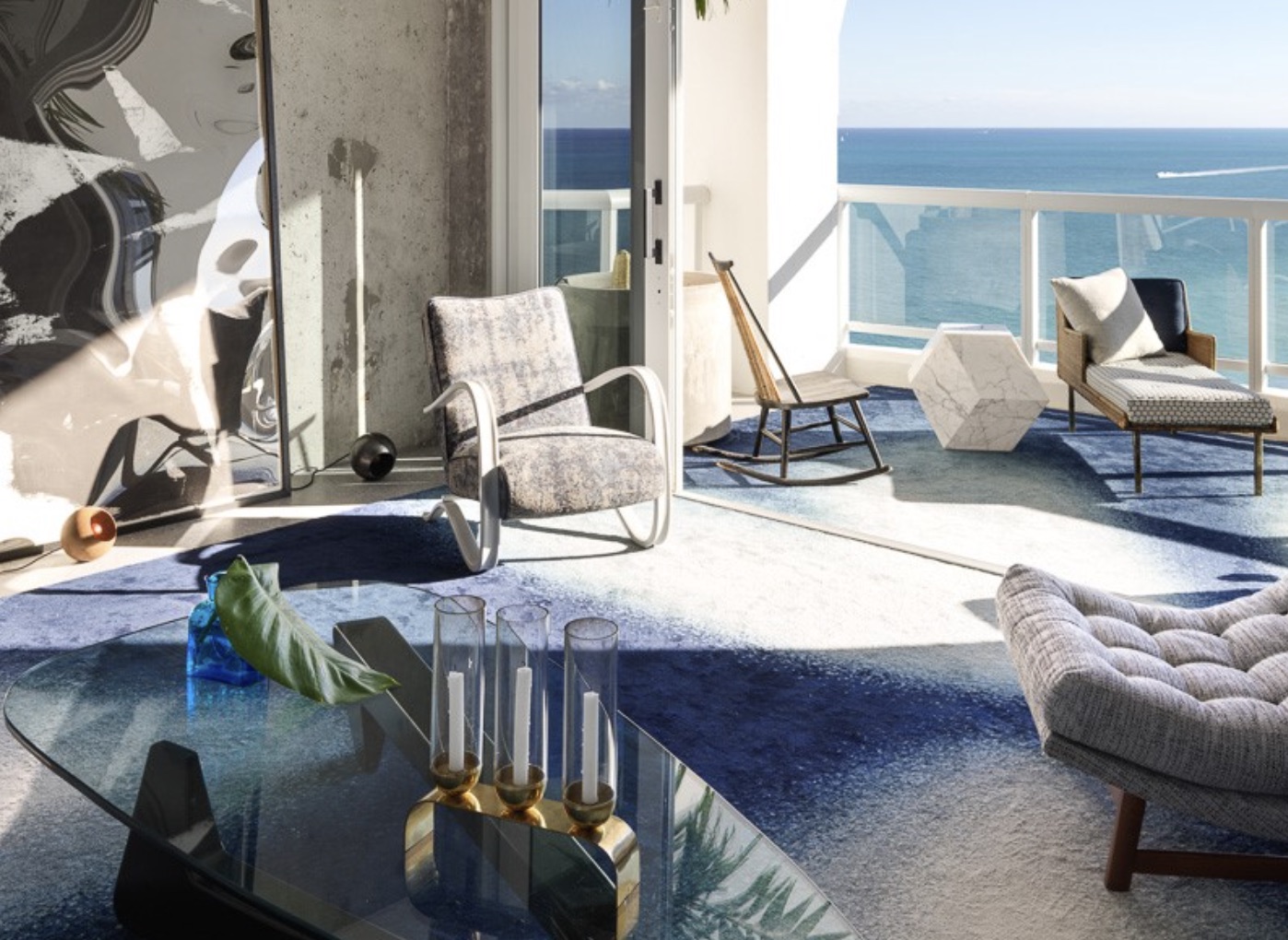 Though he readily embraces his abundance of opportunities, the seasoned tastemaker often retreats to recharge in South Beach, where he bought a home 10 years ago. “I love the sense of comfort, but also the adventure,” says the designer. “I’ve been coming to Miami for 15 years and it’s fascinating as a visitor to come to a place that’s so welcoming, so easygoing, so accessible, and so full of life. It’s a piece of paradise.” Given his affinity for the environs, it’s hardly a surprise that he’s been gradually leaving his luxe imprint on South Florida, too.

Among the highlights of his work in Miami Beach are a contemporary single-family home on Flamingo Drive, where a mix of mid-20th century accents and finishes are juxtaposed with lively furnishings and art in playful visual repartee, and an expansive penthouse in a South Beach high-rise, where gritty urban textures contrast with refined surfaces to create a surprising aerie in the sky. Yet, Deniot’s most significant commission has been developing the interiors of Elysée, a 57-story bayfront condominium developed by Florida-based Two Roads Development with architecture by Arquitectonica. As he does with every project, Deniot dug into the history of the environs and explored the architectural context before honing his ideas for a spirit of “understated theatricality” in the structure’s common areas, including three levels of amenities. “I read books by Morris Lapidus, watched the 1964 film Soy Cuba, and referenced the glamour of the 1930s and ‘40s to reflect the style, glamour, and pure oxygen of Miami.” Two Roads also enlisted Deniot to take on the interiors of the 24-story Forté on Flagler, its newest South Florida condominium project currently underway in West Palm Beach. “I love contextual exercises, design must fit its setting,” says Deniot, who, in this property, blended highly crafted custom-furnishings and some grand modern gestures with a pared-down palette and a few classic Palm Beach motifs to create a fresh take on the more tradition-inflected vibe that characterizes Miami’s neighbor to the north.

While context is invariably key to Deniot’s work, his work is also always infused with a French twist. “My taste is international, but my eye is French,” says the designer. “Everything I do reflects a sense of French editing. Yet there’s always a way for a French translation to feel contextual.” Of course, his projects also brim with the worldly flair that springs from his far-flung travels, which is underscored in a new monograph of his work called Destinations. Published by Rizzoli and showcasing a collection of his finest projects around the globe, the book is slated for release this fall.