PERSONAL SUBMARINES ARE THE NEW TROPHIES BOBBING AT THE INTERSECTION OF EXPLORATION AND NICHE TOYS. THIS PRICEY MARKET IS EXPLODING.

“Make me a submarine that’s fast enough to chase bottle-nosed dolphins underwater,” he said. The client, a wealthy businessman, had come to Netherlands-based UBoat Worx with that simple, yet unique, request, tasking the submersibles specialist with creating a bespoke vessel more akin to a torpedo than a boat. After a few sketches from its design team, he snapped up the prototype, which is now under construction for delivery in late 2023 and will be installed in the belly of his superyacht. It can hit 9 knots underwater, and dive at 45 degree-inclines on a whim, plunging to depths of almost 1,000 feet. The price tag for this bespoke toy? $5 million and counting. The big issue now, per UBoat Worx’s Roy Heijdra, is more prosaic: seatbelts. “We’ve reinforced all the safety features, because that’s the first thing that comes to mind when you’re going that fast.”

UBoat Worx is one of just three main companies working in this elite niche of superyacht submersibles, a market that’s worth around $100m per year, and climbing. There are still only 200 non-military submersibles in the world right now, per the Marine Tech Society, a sign that these remain the preserve of a rarefied few: among them, hedge funder Paul Dalio to oligarch Roman Abramovich and emir of Dubai Sheik Khalifa bin Zayed bin Sultan al-Nahyan, all of whom installed subs on their boats. Indeed, most firms making such must-have toys for any oceangoing billionaire only build two or three per year, with each costing between $1m and $3m.

California-based Seamagine is one of them. It was the pioneer in this field and first established in 1995. President and co-founder Charles Kohnen explains the key issue that he problem-solved (and patented) for private use at that time. Until Kohnen and his team adjusted the ballasting in these units, it was impossible to launch a sub unmanned, then clamber inside; rather, pilots had to be on board before they hit the water, and the vessel would be dropped into the ocean using a crane. Once they could hit the water tender-style, from a yacht garage – with no need for bulky cranes on board, either – Kohnen had unlocked an entirely new market.

The first sale he made was to a tourism operator in the Cayman Islands, but it wasn’t until helicopter pads became commonplace on yachts that it was easier to convince owners and designers to incorporate subs, too. They’ve become the ultimate decoration. “I mean, how much marble can you put on a yacht?” he laughs. Half his business is from scientific or academic researchers, and the rest is recreational. “And private clients come in two types: either they’re all about shipwrecks, wanting to find and study them, or they don’t care at all about the wrecks and just want to discover sea life – they think those wrecks are like litter.” 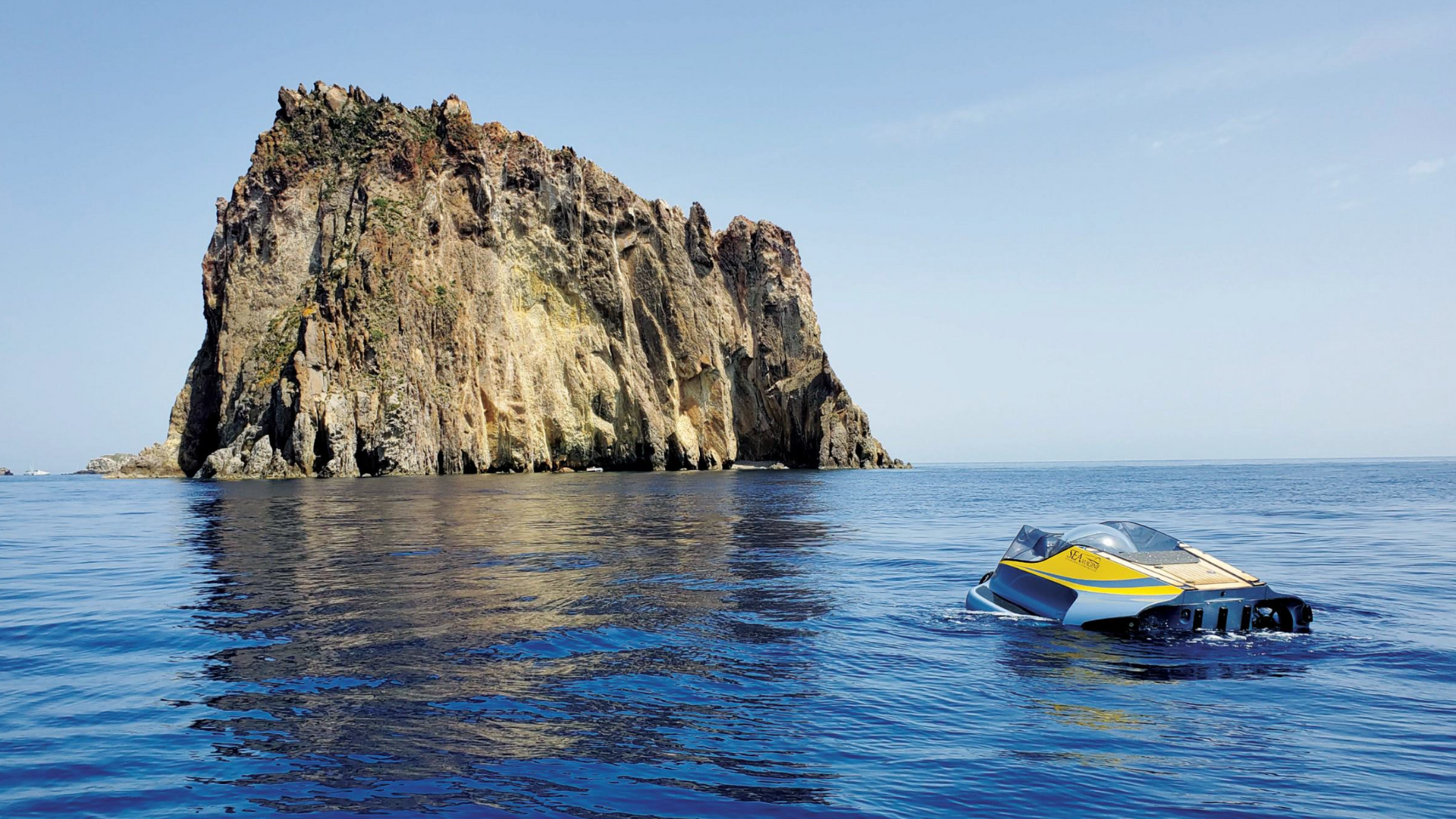 Victor Vescovo is a devoted wreck-hunter. But the private equity titan relied on tech from a rival firm for his deepwater dives: Triton, which is based in central Florida. It was Triton technology that powered Vescovo’s record-breaking plunge to more than 20,000 feet below the Philippine Sea in spring 2021 to explore the USS Johnson. Triton’s submersibles are expressly aimed at such extreme conditions – its most popular model, the 3330-3 is a $3.95m, three-seater that can dive down to more than 3,200 feet, far beyond the reach of light. Ten of these have been sold, per the firm’s president Patrick Lahey. “I am an unapologetic, ardent ocean advocate, and the reality is now that we’re able to visit parts of the ocean we simply could before,” he says.

Lahey recalls the sniggers he faced when he set up his firm in 2007. “I’d be standing at my booth at a yacht show, and people would walk by and laugh, saying ‘What a stupid idea that is’,” he recalls. He had the last chuckle, though, after selling a unit to the late mining magnate Chris Cline for his new, 164-footer Mine Games later that year. “That was the sea change moment,” Lahey says. Cline raved about his new toy to friends and in the process, acted as an unpaid evangelist for Triton’s technology among his friends. Now, says Lahey, the firm’s trialing a range of boundary-pushing new models, including a six-person sub that can reach the same depths as the 3330-3. It’s noteworthy that though the initial outlay may be hefty, he says that submersibles are cheaper to run day to day than most garage staples: just budget between $25-30 per day for soda lime to remove CO2 and oxygen. “You’d spend more than that on fuel for a jetski,” he says.

Neither Triton nor Seamagine, though, offers the ultimate in submersibles: a vessel that can convert from oceangoing to underwater, functioning as either a yacht or a submarine. That’s what Dutch firm UBoat Worx unveiled at this year’s Monaco Yacht Show: the 123-foot Nautilus, which can cruise at 9 knots or plunge to 650 feet and costs €25m (around $24.4m). The firm’s Roy Heijdra says he expects owners to take it to destinations that are as intriguing above and below the water – think the Red Sea, the Maldives or the coast of Oman – rather than, say, the Med or the Caribbean.

Nonetheless, they will likely spend time in Aruba, where the firm located its pilot-training facility. It also takes prospective clients there to trial subs before they buy. “Once you’ve been inside one, you immediately sign up,” Heijdra chuckles. The appeal of training here means that many of UBoat Worx’s clients don’t delegate pilot school to one of their shipboard staff, but instead opt to come learn themselves for a week or so – 70% of buyers of its two-seater Nemo sub, which can dive to 330 feet, opted to be so hands-on. The firm slashed the price of this vessel by 40% to €545,000 (around $532,000) this year, aiming for it to be an entry-level toy; from 2023, UBoat Worx will even keep this in stock rather than building-to-order as is typical in this industry.

It continues with its bespoke work, of course – not just that torpedo-like sub, but also designs like that it worked on for an 80 something yachter, keen to make it as easy as possible to clamber into his sub. UBoat Worx collaborated with the yacht builder to incorporate it into the design. “It sits at the stern of the vessel and has its own elevator – he can walk out of his master bedroom straight into the submarine, lowering himself into it by that elevator,” Heijdra says.

Even the innovations at UBoat Worx, though, can’t quite compete with Q. Submersibles made a splash in Daniel Craig’s swansong to Bond: a two-seat folding wing glider that converted to a sub as it touched down. Heijdra doesn’t back down from the challenge, though. “We say this to our clients: go nuts. Whatever you want, put it on a piece of paper and we’ll put in the engineering hours to see if we can come up with something.”