Although the fact that he emerged from the New York graffiti subculture of the 1980s may suggest a flippant attitude toward established institutions, artist Keith Haring didn’t take the study of his craft for granted. But, like many other creative geniuses, he liked to do things his way. While Haring attended both the Ivy School of Professional Art in Pittsburgh and the School of Visual Arts in New York City, it was a 1977 retrospective of the Belgian painter Pierre Alechinsky’s work at the Museum of Art at the Carnegie Institute that would prove to be a turning point for Haring as an artist.

Witnessing Alechinky’s expressive and spontaneous lines on a monumental scale was such a watershed moment for Haring that he returned to the exhibition multiple times, immersing himself in Alechinky’s work, voraciously learning as much as he could about the artist. “It was the first time that I had seen someone who was older and established doing something that was vaguely similar to my little abstract drawings,” said Haring of the experience on the Haring Foundation website. “It gave me this whole new boost of confidence.”

That Haring would find common ground with Alechinsky is probably not surprising to those aware of both men’s trajectories. At 95, Alechinsky is the last surviving member of the European avant-garde movement called CoBrA, a group known for its primitive and childlike imagery, as well as its active social and political concerns. Anyone familiar with Haring’s figures and other stylized imagery knows his work was largely influenced by his social activism on behalf of AIDS awareness. All these intersections are explored in Confrontation: Keith Haring and Pierre Alechinsky, an exhibition running through October 2 at the NSU Art Museum in Fort Lauderdale.

“The exhibition definitely seeks to make the argument that both Pierre and Keith were majorly influenced by the gestural brushstrokes of Japanese calligraphy, which when you watch Alechinsky’s 1955 film on the subject, also included in the show, you see incredible visual affinities between their swift, rapid lines and the linear marks created by our subjects,” says curator Ariella Wolens. “Keith wanted art to be for everyone, as did Alechinsky and the CoBrA artists (Copenhagen, Brussels, and Amsterdam artists from the 1940s and 50s) at large.”

The exhibition makes obvious the aforementioned rush of confidence Haring experienced after taking in the 1977 retrospective, which manifested itself in the Pop artist’s work via bigger canvases, horizontal paint forms, and the incorporation of spontaneous drips into his compositions. Confrontation differentiates itself from past iterations of Haring presentations by emphasizing the artist’s place within a broader historical lineage beyond American canvas.

“We worked closely with Alechinsky on this show, and while I don’t think we can say that Haring influenced Alechinsky’s creative vision or method of working, it is clear from Pierre’s account that Keith’s appreciation of his work certainly affected him,” adds Wolens. “This exhibition’s honoring of the two of them is something that he has appreciated.” 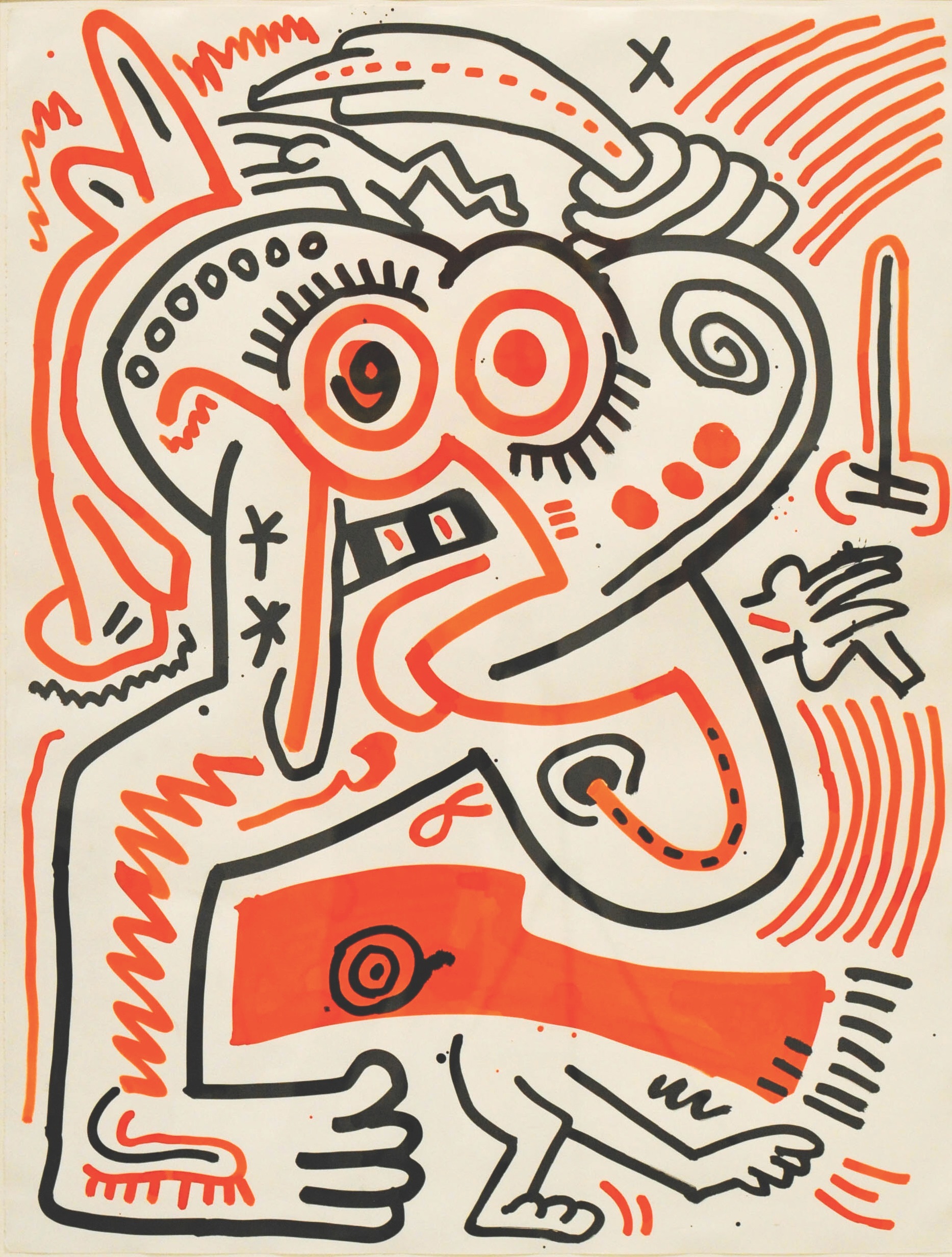