After a pandemic pivot that landed them in Palm Beach permanently, fashion designers Mark Badgley and James Mischka welcomed 2022 with a Worth Avenue boutique,  exciting, new projects and a steadfast commitment to their brand’s DNA.

Mark Badgley and James Mischka are somewhat in flux these days. Looking casual and dapper over Zoom, the namesakes of the Badgley Mischka fashion label are recounting the story of how they find themselves between addresses at the moment. 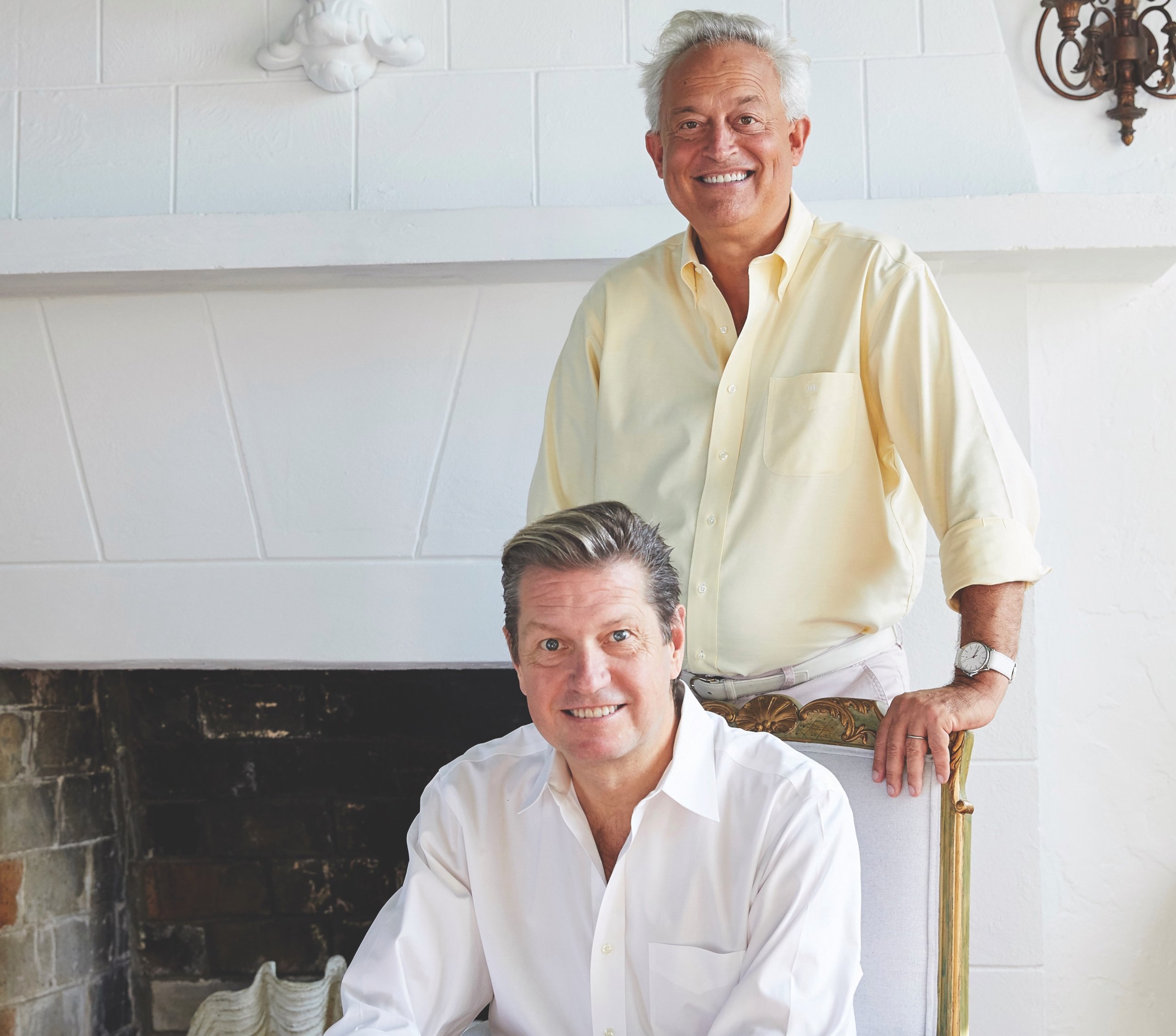 “We got one of those knock-at-the-door situations and we sold it,” says Badgley, referring to Villa Iguana, the century-old house that had been their Palm Beach residence since moving to the island in 2019. “What can I say? We had it for two years and completely renovated it, which was super fun. But we got an amazing offer for it and that’s that. Right now, we’re in a beachfront apartment and we don’t know how long we’ll be here, but that’s okay. James and I are gypsies.”

That impromptu mindset has served the two men well. Since launching their brand in 1988, just three years after meeting at the Parsons School of Design, Badgley and Mischka have steered their business with equal parts hard work and optimism. Although “new” to Palm Beach as year-round residents, their ties to the city stretch back to the early ’90s when they would regularly visit retailer Martha Phillips’ store on Worth Avenue for trunk shows of their designs.

“Palm Beach has always been a fantastical escape for us,” says Mischka. “Martha would put us up in the best hotels and we’d go down to the bar at 11 o’clock at night and all these fabulous women would be there in their sequin dresses and linen blazers dancing like they didn’t have a worry in the world. It was such a contrast to our hectic lives in Manhattan.”

As Hollywood discovered their gowns (their big moment came in 1995 when both Terry Hatcher and Winona Ryder wore the label at different red-carpet galas) and the brand expanded to include accessories, fragrance and fine jewelry, Palm Beach women remained at the top of their client list—not surprising when you consider the designers’ love for 1940s Hollywood glamour, an aesthetic that remains consistent season after season. Badgley Mischka’s joyful colors, flowing silhouettes and year-round approach to dressing make sense in a town where people like to defy rules and the fact that the brand’s creators have chosen the area as their home does too. But Badgley and Mischka’s relocation to South Florida was hardly a pandemic-forced exodus. By fall 2019, the two were already seriously considering the move. Covid’s disruption a few months later simply solidified their plans. As Mischka puts it: “There are worse places to be stuck in.”

While conducting global business without being able to travel came with its challenges, the designers embraced those uncertain months of early 2020 with their characteristic buoyancy. “It was a scary time because the clothes that we make are focused on parties and get-togethers and when all that stopped, it was devastating to our company,” says Mischka. “But we’ve always thought that part of fashion design is problem solving. How do you make things happen? This was just one more problem to solve.” After transferring deliveries to keep product moving and ensuring the label’s survival, the tastemakers used the downtime to pursue often-sidelined interests. Mischka rediscovered his love of cooking while Badgley got back to sketching, a hobby that eventually yielded a self-published book, Corona: Love in the Time, proceeds from which go to charity. Original sketches from the volume were auctioned off on eBay to raise funds for 200,000 meals for the needy through the nonprofit Feeding America.

The shutdown also proved to be a fruitful time for work. First came the launch of Luxe Lounge, a line that defines dressing in our new normal. “All of a sudden there was no need for ball gowns, but our woman still wanted to look elegant,” says Badgley. “So, we did this collection of separates that work from day to night depending on how you accessorize them. It’s something that we’ll continue to do because that’s such an important look in a woman’s lifestyle today.” Around this time, the designers were also preparing their spring 2022 collection, which required more leaps of imagination than usual. “Times were still so crazy when we were designing that line,” says Badgley, “so that collection is very much about going to beautiful places without actually going to them.” To that end, spring 2022’s pieces celebrate colors, with Italian-made prints playing a big role and a focus on seasonless garments. “Our customers are all over the place,” says Badgley. “They want versatility.”

Amid all this, they also managed to open a Royal Poinciana Plaza boutique that has since moved to Worth Avenue, a spot that’s better suited to the Badgley Mischka DNA. “It’s got a bit of a residential feeling,” says Badgley about the space. “There are antiques that James and I have collected for years, and the furniture came from our homes. It’s very inviting. Women come in with their dogs or children and have fun trying on clothes, which is exactly the vibe we wanted.”

The last two years have also opened new opportunities for the duo. On the docket for 2022 is a branded residential project in South Florida that will showcase their skills in interior design, something they know a thing or two about. “We’ve done a couple of furniture collections and we designed the presidential suites at The Breakers,” says Mischka. “Plus, in the time we’ve been together we’ve had 29 homes or apartments. We can write the book on renovations.” There’s also the launch of a new fragrance, their second, in the fall. While details on those undertakings are still under confidentiality commitments, there’s no doubt the designers’ indelible stamp will be impossible to miss.

In between, Badgley and Mischka make no qualms about enjoying the best Palm Beach has to offer—brunch at Sant Ambroeus, dinner at Renato’s and antique hunting at Casa Gusto, as well as indulging Badgley’s equestrian pursuits in nearby Wellington, where he finds himself riding his horses up to five days a week.

“When we started coming to Palm Beach three decades ago, we never thought we’d live here, so we have to pinch ourselves on mornings when the weather is perfect and it’s 35 degrees and miserable in New York,” says Badgley. “We’re so happy we get to cement our roots here.”